India is open to collaborations with interested countries: Piyush Goyal 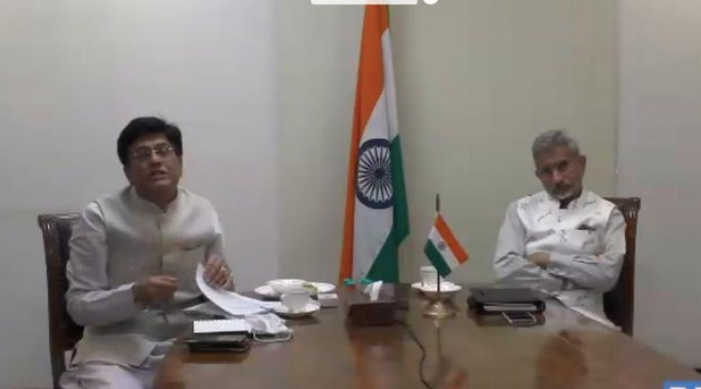 “India is open to mutually benefitting collaborations with interested countries as far as the reciprocity in the deal is maintained,” Minister of Commerce and Industry Piyush Goyal said while interacting with foreign missions in New Delhi, through video conferencing on May 1.

The Minister said India gives the most importance to “the fair dealing and the reciprocity’ while signing any multilateral agreements. This was the reason India didn’t participate in Regional Economic Comprehensive Partnership (RECP).

He said this is the best time to connect digitally for the planning of a road map for bilateral (or multilateral) agreements.

The Minister appealed to other countries for the collaborative efforts against the outspread of Coronavirus pandemic. He said that India is ensuring the safety and well-being of the foreign nationals currently in India. He thanked them for participating in 9-minute light off, as asked by the Prime Minister on April 5.

Goyal said that the recent surveys and studies have proved that “the tough and appropriate role played by the Prime Minister during the crisis” is the best stimulus against the crisis and it has been appreciated in the country as well as all around the world.

Mentioning about many world leaders including President Trump congratulating India for exporting medicines, the Minister said Indian pharmaceuticals industry is playing an important role in producing and delivering medicines not only to India but also for the rest of the world.

Expressing confidence that India will play a leadership role in the post- COVID world, he said India is ensuring that no country will remain deprived of the essential medicines, especially underdeveloped countries.

He assured them that if any assistance in the form of medicine is required from India, we will try to fulfill it. But in the long term, we have to make a quick roadmap for the sustainable trade of the pharmacy sector. According to Prime Minister Modi, as a global citizen, it is our responsibility to serve the one in need.

Talking about ‘Pradhan Mantri Ayushman Bharat’, a healthcare scheme in which a beneficiary is availed with Rs 5 lakh of quality medical treatment, he said the scheme is going to be crucial during the pandemic.

He underlined the effectiveness of the immediate nationwide lockdown with a special reference to the high reduction in the rate of doubling the cases.

The Minister said during this crisis, the central government is forming long term strategies for the revival of the country’s economy out of the crisis. He said this is a time to identify the true partner for our own countries to find collaborations in the future.