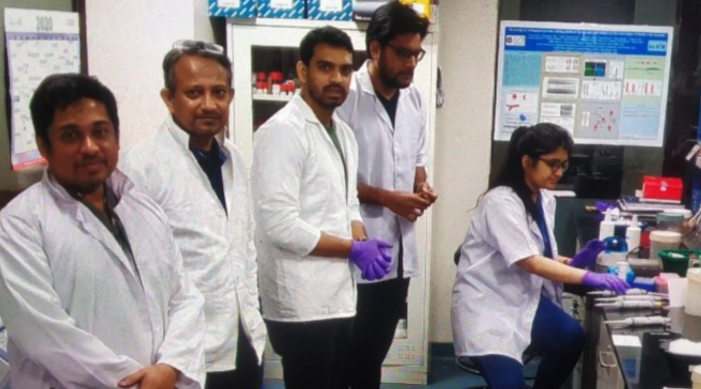 More than half a dozen firms and research institutes in India have joined a global race to develop a vaccine for the coronavirus as it continues to wreak havoc worldwide, causing at least 230,000 deaths so far.

Some are in global tie-ups while others are working on their own.

Bharat Biotech International is working with the University of Wisconsin-Madison and fellow vaccine firm FluGen in the United States to develop a nasal vaccine for Covid-19 called CoroFlu.

The three were already in a partnership to develop an influenza vaccine, which is in phase 2 of clinical trials and forms the base for the coronavirus vaccine as well.

Dr Krishna Ella, chairman and managing director of Bharat Biotech, said: "Little did we know that this influenza vaccine candidate would become very useful as a 'backbone' in developing CoroFlu which is a vaccine candidate that hopefully will be effective against Covid-19 and influenza."

He said the university will conclude animal trials in the next four to six months and his firm, which has the capacity to produce 300 million doses a year, will start human trials to get CoroFlu ready by late this year or early next year.

One biotechnology company that is even further along is the Serum Institute of India, the world's largest vaccine maker by number of doses - 1.5 billion a year - produced and sold globally.

It has already started producing a vaccine even as human trials continue at Britain's Oxford University.

Experts said India's strength in these efforts is its ability to scale up production quickly and at a low cost.

"They have the capacity to produce large amounts. There are other groups (in other countries developing vaccines) but India has the tremendous capacity for ramping up vaccine manufacturing," said Dr K. Srinath Reddy, president of the Public Health Foundation of India and a member of the Indian Council of Medical Research Covid-19 task force.

India can expect to benefit even if it is unable to develop a vaccine ahead of others.

Dr Reddy said: "If the vaccine is available (from elsewhere) and shared globally, we should be able to put all our resources on to a larger manufacturing scale."

There are other groups (in other countries developing vaccines) but India has the tremendous capacity for ramping up vaccine manufacturing.

DR K. SRINATH REDDY, president of the Public Health Foundation of India and a member of the Indian Council of Medical Research Covid-19 task force.

India is the world's third-largest producer of drugs, with the pharmaceutical industry worth around US$38 billion (S$53 billion) a year.

Other firms working on a vaccine include Biological E, Indian Immunologicals and Mynvax, which are developing a vaccine each, while Zydus Cadila is developing two vaccines.

His firm is working on two vaccines, including a DNA one that targets the viral membrane protein that is responsible for the cell entry of the coronavirus.

"This vaccine is at the animal testing stage and if the results are successful it will go into clinical trials in the second quarter of this financial year," said Mr Patel.

The firm is also exploring the use of a biologic drug Interferon alfa-2b to treat Covid-19.

Meanwhile, research institutes in the country are also hard at work.

Dr Raghavan Varadarajan of the Indian Institute of Science, a research university, started working on a vaccine in early February with four students and two scientists at Mynvax, a start-up founded by him and a colleague. The vaccine has entered animal testing.