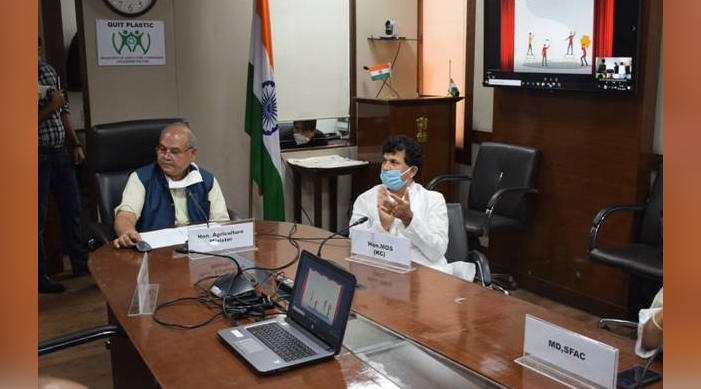 With an aim to reach the last mile farmers and transform the way they sell their agricultural produce, Union Agriculture Minister Narendra Singh Tomar on Friday facilitated the integration of 200 new mandis to the e-NAM platform from seven states.

Speaking at the function in Krishi Bhawan, the Union Minister said that by May 2020, there will be around one thousand mandis joining the e-NAM platform for marketing the agricultural produce.

Earlier, the Union Minister also witnessed through video conference, a live trading between mandis from Kurnool and Hubli in groundnuts and maize. He said the Prime minister’s vision of using technology for the benefit of farmers will soon be realised.

This will bring the total e-NAM mandis in the country to 785. This is the first milestone achieved in the path of integrating 415 new markets across the country. It is for the first time that Karnataka State has been added to the list of e-NAM States.

With the aim to reach the last mile farmer & transform the way they sell their agri produce, e-NAM has gained more strength today by reaching out to more farmers & traders of these new mandis. Already 585 mandis in 16 States and 02 Union Territories have been integrated and are working.

e-NAM is also integrated from today with the Unified Market Platform (UMP) of Karnataka’s Rashtriya e-Market Services (ReMS), an e-trading platform promoted by the Karnataka State Agriculture Marketing Board. This will facilitate traders across both the platforms to execute seamless trading in both the platforms by using Single Sign On framework.

This is for the first time in India that two different e-trading platforms for Agri commodities of this scale will be made interoperable. This will help farmers of Karnataka to sell their produce to large number of traders registered with e-NAM and even farmers from e-NAM mandis in other States will be able to sell their produce to Karnataka traders who are enrolled with ReMS platform of Karnataka. This will also promote inter-State trade between the States on-boarded on e-NAM platform & Karnataka.

e-NAM has come a long way with 1.66 Crore Farmers & 1.28 lakh traders having been registered on e-NAM platform. As of 30th April 2020, total trade volume of 3.41 Crore MT and 37 Lakh numbers (Bamboo & Coconut) collectively worth approximately Rs. 1.0 lakh crore have been recorded on e-NAM platform. A path-breaking and revolutionary concept in the Agri-sector, the e-NAM online platform has proven to be a giant leap in reforming the agriculture market in India.

In addition, Ministry launched two major modules in e-NAM last month to deal with the COVID-19 situation so that famers can sell their produce without bringing them to mandi. These modules are: FPO module helping farmer members of FPO to trade from their collection center and other being warehouse modules whereby farmers can sell their stored produce in WDRA registered warehouses, declared as deemed mandi by States.

In addition, the Ministry has launched recently the “Kisan Rath” mobile App which is helping farmers in finding a suitable transport vehicles/tractor to carry their produce to nearby mandi and warehouse etc.