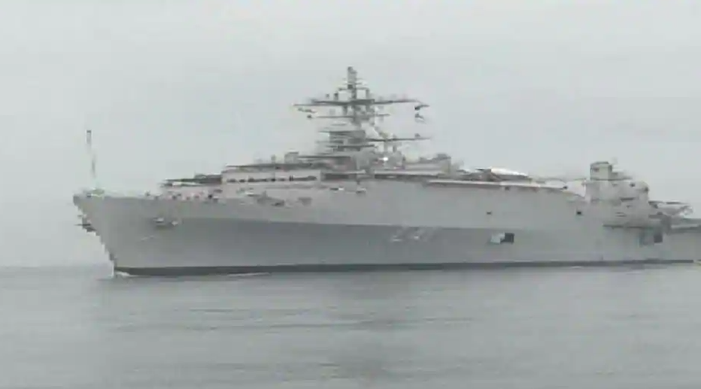 According to initial reports, majority of the evacuees have lost their jobs due to slowdown of the economy of the island

The Indian Navy ship INS Jalashwa, carrying 698 Indians stranded in Maldives due to international travel restrictions owing to coronavirus lockdown, arrived in Kerala’s Kochi port on Sunday. The warship had started its journey from the island on Friday night.

Out of these evacuees, 440 are from Kerala, 110 from Tamil Nadu and 45 from Karnataka. “OP# Samudra Setu #Jalashwa with 698 Indian citizens embarked from Maldivesat Kochi, Kerala,” a spokesperson of Indian Navy tweeted.

According to the Indian Navy, there are 19 pregnant women among the 698 Indian nationals.

Each passenger was charged US $40, one of the passengers told Hindustan Times over phone. The Navy spokesman said that they were charged only to meet the expenses required during the trip which was part of series called ‘Samudra Setu’ operation. The evacuees disembarked at Kochi port and will have to undergo test for coronavirus disease Covid-19 before undergoing 14-day quarantine.

Kochi district administration has made all arrangements in this regard, said Ernakulam district collector S Suhas.

According to initial reports, majority of the evacuees have lost their jobs due to slowdown of the economy of the island which is a major tourist destination. Teachers and medical personnel from Kerala are most sought after in the island nation which shares many similarities with the southern state.

The Navy had earlier said that the INS Jalashwa mission highlighted India’s commitment to safeguarding its diaspora anywhere in the world.

While travelling back to Kochi, Kerala, the warships of the Western Fleet had joined the warship.