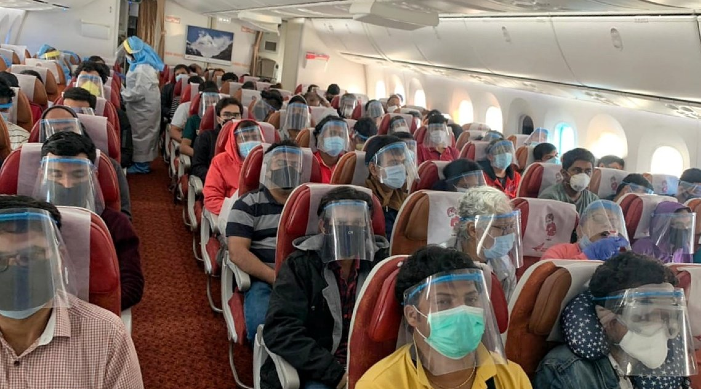 India’s one of the largest initiatives to evacuate its nationals from foreign countries, the first since the 1990 Kuwait War, has resulted in 6037 people being flown back to the country in 31 inbound flights operated under ‘Vande Bharat Mission’ in five days since May 7.

According to a press statement from the Ministry of Civil Aviation, 6037 Indians have been flown back to India in 31 inbound flights operated by Air India and Air India Express under Vande Bharat Mission in 5 days beginning from May 7, 2020.

Under this mission, the Ministry of Civil Aviation is coordinating with the Ministry of External Affairs and state governments for bringing Indians back to their homeland.

Air India along with its subsidiary Air India Express are operating a total of 64 flights (42 by Air India and 24 by AI Express) to 12 countries like USA, UK Bangladesh, Singapore, Saudi Arabia, Kuwait, Philippines, UAE and Malaysia to repatriate 14,800 Indians back in the first phase.

Talking about safety measures being adopted during evacuation, the Civil Aviation Ministry said each and every function in this massive air evacuation mission strictly adheres to the safety and hygiene protocol laid down by the government and DGCA.

“The Ministry of Civil Aviation, Airports Authority of India and Air India leave no stone unturned to prioritize the safety of passengers, the crew and ground handling staff in these sensitive medical evacuation missions,” the ministry said in its statement.

Extensive and meticulous safety arrangements are made in accordance to government guidelines, it added.