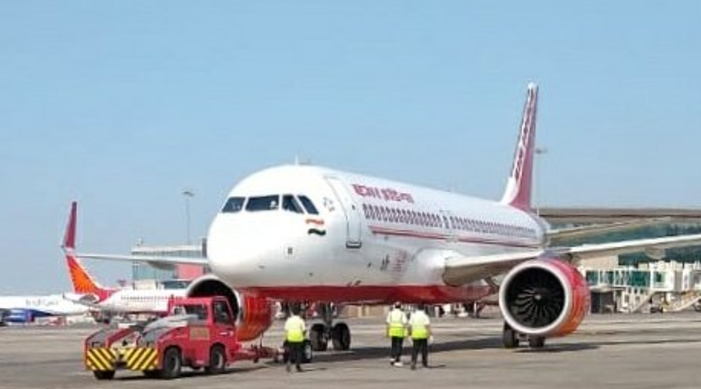 National carrier Air India's first evacuation flight to Karnataka from London landed in this tech city, with 326 passengers who are citizens of the southern state," an official said on early Monday

The flight was over 101 minutes behind schedule, as it flew via New Delhi where it took off at 2.23 a.m.

All passengers were seen wearing masks and maintaining physical distance while coming out of the aircraft through the aero-bridge and till exiting the airport after thermal screening, testing and filling up the self-declaration form about their travel history, health status and other details for contact tracing.

Nearly an hour after landing, the asymptomatic passengers were ferried in state-run special buses to star hotels and resorts in and around the city in batches of 20 for the mandatory 14-day quarantine amid the lockdown.

He also thanked Air India, Ministry of Civil Aviation, Bureau of Immigration and the Karnataka government for their cooperation and support.

As the returnees, including women, senior citizens, students, tourists and others were stranded over 47 days in Britain due to the Covid-19 induced extended lockdown since March 25 and suspension of overseas flights since March 23, they looked relieved and happy to be back home.

"We are ready for the 14-day quarantine as it is mandatory. What is important is that we are back home at last, as better late than never," a passenger told local news channels in Kannada outside the airport terminal.

The passage from the arrival exit to the bus stop was barricaded and disinfected. On entering the arrival lounge from the aircraft, the returnees were given fresh masks to wear and to discard the one they came with from London.

"As per the standard operating procedure, passengers who did not have Indian mobile connection, were given a new sim card by the local operators and got it activated to download the mandatory quarantine app, the Aroygya Sethu app and Apthamitra app before leaving the airport," said the official.

As commercial passenger flights remained suspended since March 23, the airport lounge was near empty and baggage clearance of the returnees was fast.

The passengers also opted for the star hotel of their choice suitable to their budget at the counters in the airport terminal for their 14-day quarantine.

About 20 five-star hotels and resorts, 25 three-star and 40 budget hotels are offering their rooms to the foreign returnees, with boarding and facilities in compliance with the state health department's guidelines and protocols.

As part of the Indian government's evacuation programme 'Vande Bharat Mission', three more repatriation A-I flights are due to land in Bengaluru from Jeddah in Saudi Arabia, San Francisco in the US and Singapore on May 13-15 with over 600 state citizens.

Two A-I Express flights are slated to land at Mangaluru airport on the state's west coast on May 13-14, with about 350-400 returnees from the Gulf region.