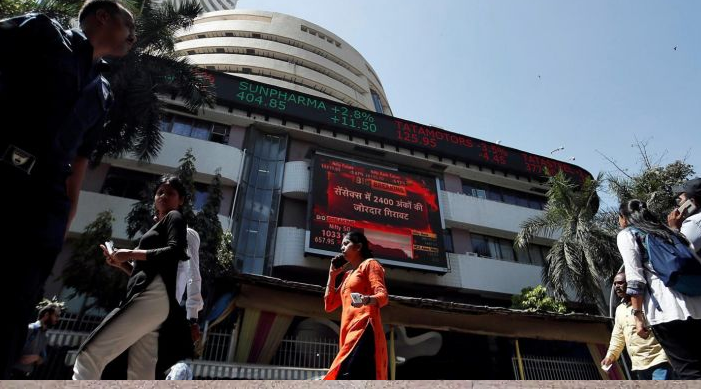 About 1.2 million new accounts were opened with the Central Depository Services (India) in March and April

Hemmed in by the world's strictest stay-at-home measures, Raunaq Singh, owner of a clothes store in India's capital of New Delhi, has begun to dabble in the nation's equities.

"I had been thinking about it in the past few months, but I had a busy schedule," said the 27-year-old, who split 160,000 rupees (S$3,029) between a couple of stocks over the past month. "There was no better opportunity than this to open a trading account."

Singh joins a growing contingent of individuals across the globe who are getting their feet wet in the stock market as social-distancing rules keep them at home. About 1.2 million new accounts were opened with the Central Depository Services (India) in March and April, up from a combined 900,000 in the first two months of the year, according to data from the Mumbai-based share depository.

With risk assets sinking to multi-year lows in March because of the coronavirus pandemic, retail investors globally spotted a buying opportunity and piled into equities. India's S&P BSE Sensex index remains 26 per cent below its January peak, even after rebounding from the sell-off, burnishing the allure for stocks. Valuations for the gauge have become cheaper, about a quarter below their three-year mean.

"Work-from-home has given people the bandwidth to do something that they haven't done, and the rapid price fall gives the perception that things are available for cheap," said Nithin Kamath, chief executive officer of Zerodha Broking, the nation's biggest online discount broker with 1.6 million clients.

Zerodha has seen monthly account openings double since February, with a 20 per cent increase in first-time investors, mostly under 30 years old, he said. Upstox, another discount broker, moved a chunk of its processes to cloud-based systems in April to cope with the jump in trading volume and account openings, said Amit Lalan, a director at RKSV Securities, owner of the digital platform.

The trend is playing out in other markets as well. In the US, E*Trade Financial, TD Ameritrade Holding, and Charles Schwab each saw record sign-ups in the March quarter, driven by retail investors. In the Philippines, local investors are jumping in to ride what they hope will be a strong rebound, even as foreign funds flee. It's a similar story in Singapore, where record low interest rates are tempting some retail investors to load up on debt to buy shares.

RESCUE PACKAGE
It's not all rosy, though. The staying power of the rally in global stocks remains in doubt amid poor economic data and fears of another wave of the virus. India's Finance Minister Nirmala Sitharaman offered US$72 billion in credit lines to small businesses and power distributors on Wednesday, as part of a package totalling US$265 billion to restart the economy cratered by the pandemic. The government will spend US$20 billion to lift incomes for farmers and fishermen, she announced on Friday.

The South Asian nation of 1.3 billion people has recorded more than 95,000 Covid-19 cases so far, according to data collected by Johns Hopkins University. The initial three-week stay-home order got extended another time, and is now due to last until May 31, with some easing of restrictions in certain sectors to boost economic activity.

The extent of the economic damage from the lockdown and its impact on corporate earnings aren't fully priced in, Zerodha's Mr Kamath said. He expects the spike in new sign-ups to ebb once the impact becomes apparent. Unlike in China, mom-and-pop investors don't hold much sway over India's US$1.6 trillion stock market, which is dominated by local and foreign institutional investors.

Still, Singh is looking past this pessimism as he plans to hold his shares for three years.

"Given the uncertainty about the outbreak, it feels like a gambler's market right now, but I am investing for the long term," he said.