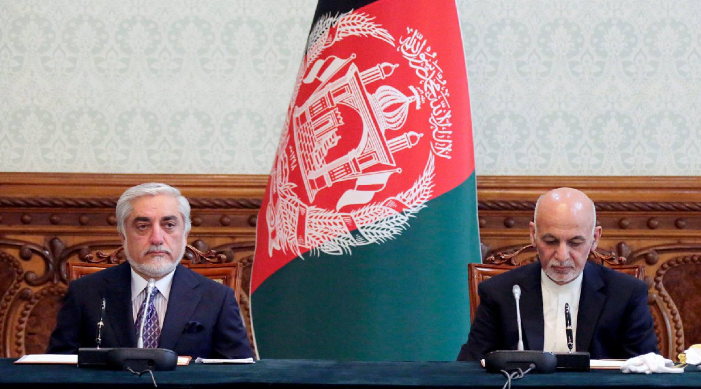 India has welcomed political agreement between Afghan President Ashraf Ghani and his rival Abdullah Abdullah, stating that it will result in renewed efforts for lasting peace and stability in the war-torn land locked country.

On Sunday the Afghan President’s spokesman Sediq Sediqqi tweeted that a political deal has been signed between Ashraf Ghani and Abdullah in which Ashraf Ghani will remain President of Afghanistan, while Abdullah will lead the country’s National Reconciliation High Council, a body which has been given the authority to handle and approve all affairs related to Afghanistan’s peace process.

“India hopes the Political Agreement and creation of the High Council of National Reconciliation will result in renewed efforts for establishing enduring peace and stability and putting an end to externally sponsored terrorism and violence,” the Ministry of External Affairs said in a statement issued on Sunday. Since last December when Afghanistan’s Election Commission declared Ashraf Ghani winner of the September 28 election with more than 50 percent of vote, the land locked country was in political disarray.

Abdullah Abdullah had received more than 39 percent of the vote, but he accused the Election Commission of voting irregularities. Both Ashraf Ghani and Abdullah Abdullah declared themselves president in parallel inauguration ceremonies in March.

They have been in locked in political fight since then, resulting in chaos and uncertainty. It is amidst this development, upset Americans threatened Afghanistan of cutting down $1 billion in assistance to the country if the two were not able to patch up.

Now that the two leaders have entered into a political agreement, India hopes that it will lead to ending externally backed violence in the war-torn country. India has consistently supported inclusive governance, national unity, strong institutions, Constitutional order, rights of all sections of society and the territorial integrity of Afghanistan.

“The continuing and enhanced violence and terror in Afghanistan is a matter of deep concern. India calls for an immediate ceasefire and assistance to the people of Afghanistan to deal with the humanitarian situation arising from COVID-19,” the MEA said in its statement.