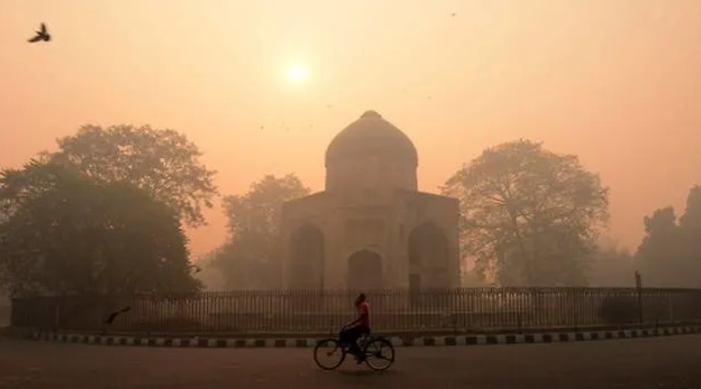 India has recorded its first year-on-year drop in carbon emissions at the national level for nearly 40 years, an outcome that analysts say will strengthen the government’s push to phase out dirty fossil fuels.

In a country increasingly accustomed to heavily polluted air, the global COVID-19 pandemic has resulted in rare blue skies, showcasing the possible future benefits of greater action on climate change.

With heavy industries shuttered, the transport sector barely operational and demand for electricity plummeting, the country’s CO2 emissions fell by an estimated 15 per cent during the month of March and a likely 30 per cent in April, according to an analysis by the Center for Research on Energy and Clean Air (CREA).

Overall, emissions were reported to be down 1 per cent during the fiscal year ending March, compared to 2019. The last time negative growth was experienced was back in 1982, when emission levels were a fraction of what they are today.

While India was already on course to slow the rise of carbon emissions this year - partly due to its progress on installing cleaner energy infrastructure - the unexpected health crisis has magnified the improvements and given momentum to an already fast growing renewables sector.

During March and April, coal-fired generation slumped significantly. At the same time, renewables output increased by 6.4 per cent in March and saw a slight decrease of 1.4 per cent in the first three weeks of April.

Coal demand dropped over the fiscal year, the first year-on-year fall in deliveries in two decades. Demand for oil has been falling since the start of 2019, and has crashed during the period of national lockdown.

“We anticipated in 2019 that we might not see the same growth in CO2 emissions the way we’d seen in previous years in India. We thought they would come down significantly. That was without even knowing about the coronavirus,” said CREA analyst, Sunil Dahiya.

“The already declining rates of CO2 emissions, coupled with the coronavirus has resulted in this negative growth, which was not anticipated for India,” he added.

Whether India can sustain the negative growth of emissions, in the short or long term, will likely depend on how the government responds during the economic recovery period post-pandemic, the CREA report explains.

Prime Minister Narendra Modi announced last week a US$266 billion stimulus package to attempt to rehabilitate and reignite the Indian economy. It is unclear if the bailout of coal power operators will be conditioned on green reforms or the restructuring of current power purchasing agreements, which could have a permanent impact on the energy sector.

But the prospects of sector change are positive. And while Dahiya expects pollution levels to rebound, he is confident that the national energy trends, and the motivations of the government will prevent a return to heavy polluting days.

“India is at a juncture and this time will prompt a rethink into where our investments should be focused going forward. It is very, very likely that India’s emissions will increase but won’t go back to old emission levels,” he said.

INDIA AS A RENEWABLES POWERHOUSE

India has emerged as a force in the solar energy sector - it is the spearhead of the International Solar Alliance and now operates the world’s two largest utility-scale solar parks. The country has a long-term target of 450GW of renewable energy by 2030, of which 91GW is already operational, with a further 50GW capacity under development.

Renewable energy plants have been given “must run” status, essentially meaning they cannot be shut off, a show of faith in the sector’s reliability.

“Even with the crisis, the momentum in India’s renewable energy remains strong. If these targets are met India will ensure continued reduction in emissions,” said Kashish Shah, a research analyst at the Institute for Energy Economics and Financial Analysis.

“India should rightly take pride in being able to execute world-leading renewable energy projects and continue to work to resolve short-term policy impediments to achieving its long-term renewable energy aspirations,” he wrote in a recent report.

Already, the economics make sense for injecting more resources into clean technologies. Shah estimates that up to US$700 billion of investment capital opportunities could be unlocked once domestic policy headwinds are addressed.

“Until now, it’s made sense from an environmental and climate perspective. The only argument that was not in favour of renewable energy was the economic viability and scale - it being more expensive than coal,” said Dahiya of CREA.

“Now in India we have reached a time where renewable energy is much, much cheaper than coal-based energy. The Indian government has realised this and that’s why they’re favouring really ambitious renewable energy targets.”

The politics of pursuing a clean agenda has also never been clearer in India, as the health and environmental impacts of climate change continue to adversely impact the 1.35 billion-strong population.

This lockdown period could further mobilise civilians and empower them to demand cleaner air and comprehensive action, Dahiya says.

Key obstacles include the enforcement of air standards and the annual mass burnings from agriculture.

“Since 2015, the awareness from the public about what air pollution is, what it can do to your health, and where it comes from has definitely grown,” he said.

“The fight for people’s rights to breathe will only strengthen after seeing this clean air and blue skies. There’s no turning back."

India’s first-ever National Clean Air Programme has non-enforceable targets to slash air pollution across cities by up to 30 per cent by 2024. The country remains the third-largest contributor of global carbon emissions.