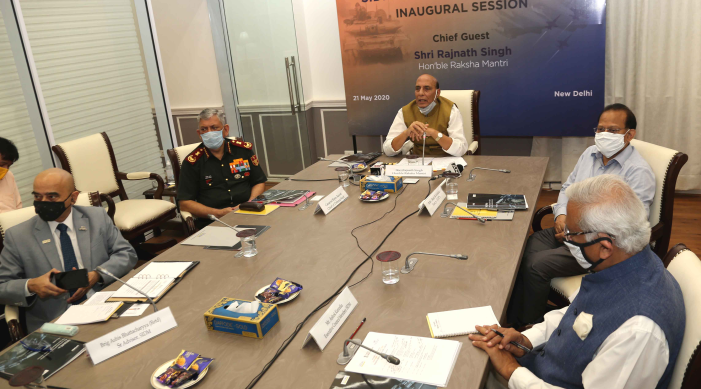 As per Defence Minister, the 'Aatma Nirbhar Bharat' campaign, inspired by Prime Minister Modi will provide many opportunities to Indian industry and will help in restoring millions of jobs

He said, “Prime Minister Narendra Modi has called for being 'vocal for local' in this direction. I would like to say that we have to have our indigenous products, ie 'vocal for local', but before that in our own life, 'local' has to be focal.”

Rajanth Singh said the 'Aatma Nirbhar Bharat' campaign, inspired by Prime Minister Modi will provide many opportunities to Indian industry and will help in restoring millions of jobs.

Keeping MSMEs strong is one of the priorities of the government, he said while terming the sector as the backbone of the country’s economy because of its role in accelerating GDP growth, earning valuable foreign exchange and generating employment opportunities.

“There are more than 8,000 MSMEs, ordnance factories, DPSUs and service organisations. They contribute more than 20 per cent of the total production of these organisations,” the Defence Minister said.

Acknowledging the hardships faced by the defence industry, Rajnath Singh said, “Manufacturing sector has been affected the most due to lockdown and disruption in existing supply chains and the defence sector is no exception to this. Rather, it can be said that the defence sector is more aggravated than other sectors as the only buyer of defence products is the government.”

The SIDM has conducted many interactions with senior officials of the Ministry and the Armed Forces since the lockdown came into force. This has given an opportunity to get to know the problems of defence industries and many suggestions for their prevention have also been received from SIDM.

To tackle these challenges, he said, MoD has taken several steps for industries, especially MSMEs. Such as: extension of response dates of RFP/RFI, early clearance of pending payments, In this crisis, several financial support measures have been announced by the government and RBI to reduce the financial burden of the industries. These will provide some relief due to the availability of additional working capital, deferment in interest payments.