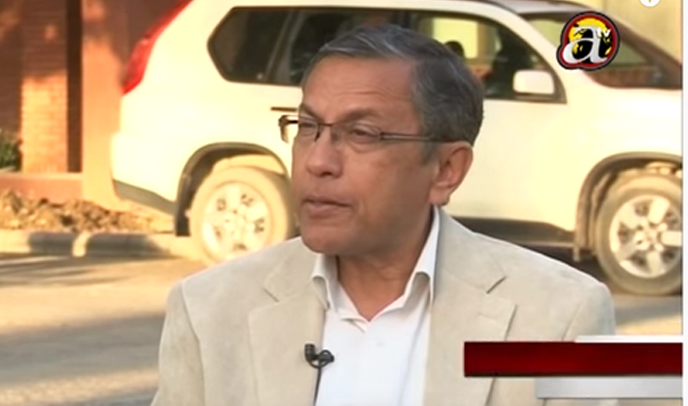 China has been very actively involved in the domestic process in Nepal in recent months, says Ambassador Ranjit Rae in an exclusive interview

India should not allow Irritants in the relationship with Nepal to develop further since China’s role and influence in the country is growing very strongly, Ranjit Rae, who was India’s Ambassador to the country from 2013 to 2017, has said.

There were forces keen on spoiling India-Nepal relations, he warned during an interview to IndiavsDisinformation.com while talking about the history of the boundary issue that has been raised by Nepal and the way forward for India.

Pointing out there has been a gap in Foreign Secretary level talks between India and Nepal, Rae has suggested that this process should be resumed immediately. If it is not possible to hold a physical meeting, a virtual conference should be organised at the earliest, he said.

Excerpts from the interview:
What is the boundary issue being raised by Nepal all about?

About 98% of the India-Nepal boundary is already agreed upon by both countries. In the early 80s, a very detailed mechanism was agreed upon.

It was only for 2%, which includes Kalapani, that the technical committee could not come to a final decision. It was therefore agreed that most of the work was done and these areas can be handled at a higher political level, the Foreign Secretaries.

This is an ancient, historical issue. The India -Nepal boundary was agreed upon between the British East India Company after two Anglo-Nepalese wars. There is the Kali river in the eastern sector. As for Susta, the river keeps changing course so it should have a fixed boundary.

The rest of the entire boundary is agreed on.

Kalapani is a historical issue. In the 19th century, several maps were published. Over the years, there have been changes in the manner in which the boundary was depicted.

The traditional routes between Indian and Tibet were all through this area. There was no dispute. It was only in 1990 that the issue was raised by the Nepalese side.

What is the reason for Nepal to raise the boundary issue now?

From time to time, one raises these issues to divert attention. There is a big asymmetry in size, there is always this feeling that if you (Nepal) stand up to India, you become stronger politically.

There were reports of changes in leadership. There was active involvement and engagement of the Chinese Ambassador trying to patch up within the Nepalese communist party. We have to see it (recent developments) in that context.

Construction of the road had been going on for many years. But the opening of the road became a red flag for the Nepalese. There were gheraos (blockades) and protests; effigies were burnt.

There were attempts to whip up anti-India sentiment. The Nepalese government has issued a new map, there are moves for a Constitutional amendment to incorporate the new map. They have opened a check post very close to the area.

What do you feel is the way forward for Indian and Nepal?

These issues have to be resolved through dialogue. Nepal is a very friendly country...there is a very strong people-to-people relationship.

There is a method to resolve issues. India said it will resume Foreign Secretary level talks. The time has come to settle irritants before they become bigger. Historical issues and have to be resolved in a calm manner.

Nepal itself has been undergoing political upheavals. Maoists, peace process where India played a role. Nepal has been preoccupied with its own internal domestic issues

In 2015, India and China signed a trade agreement. Nepal issued a protest note.

After the new map of Jammu and Kashmir, Nepal reached out to us on how we were showing parts of their territory.

In 1954, as part of the Panchsheel Agreement, Lipulekh was mentioned. There was no protest from Nepal then. It is only now that it is being made a big issue.

There is no point in allowing these irritants to develop, the best way out is to have talks

Perhaps a virtual meeting. This process should begin now. There are forces keen on further spoiling India-Nepal relations.

There has been a gap in Foreign Secretary level talks. This should be rectified and we need to deal with it swiftly.

There have been suggestions that Nepal is acting at the behest of China. What is your view on this?

The border issue has been raised from time to time, in 2015, 2019 and now. The Chinese influence and role in Nepal growing very strongly. In the past, these have been related to projects, connectivity projects, especially after 2015 when Nepal signed a lot of agreements with China.

The Chinese influence has grown, no doubt about it.

At the same time, China has issued a statement that it (the boundary issue) is a bilateral matter and should be resolved between Nepal and India. Nothing should be done to disturb the status quo. This sets to rest any move within Nepal on tripartite discussions.

India's relationship with Nepal is intimate but there are problems. The way ahead is by developing mutual trust and greater engagement. We need to step up our engagement since communist forces in Nepal are becoming strong.

Step up engagement at all levels - middle level, youth, civil society. There should be economic engagement as well as a cultural connect. We need to specially focus on the youth. They are turning away from India and getting into anti-India sentiments.

We have to redouble our efforts. The Neighbourhood First policy needs to be strengthened. One should look specifically at contacts between political leaders in India and Nepal at other levels, between bordering states, across political parties...we really need to step up the engagement.

Q. What do you have to say about Prime Minister KP Oli’s statement in Parliament?

I object to the tone and tenor of the Nepalese PM in Parliament. More than just talking about the virus, he was joking about our national emblem. This is.not the language used by such a senior leader, particularly in Parliament. He has this rhetorical style, one has heard that the written text did not have this...he tends to get carried away. But one should not underestimate the impact. This matter should be laid to rest.

Q. India has strong religious and cultural ties with Nepal. How can the two countries build on this?

We have very strong cultural, religious links. That is a very solid foundation. The ground is very right for a strong push.

Buddhists would like to go to places like Lumbini and also Bodh Gaya. Similarly, Hindu pilgrims would like to visit Janakpur. We can develop the Ramayana circuit comprising India, Nepal, and Sri Lanka.

Another aspect that can be looked at is the Leave Travel Concession (LTC) for government employees. Can’t we also include Nepal under this?