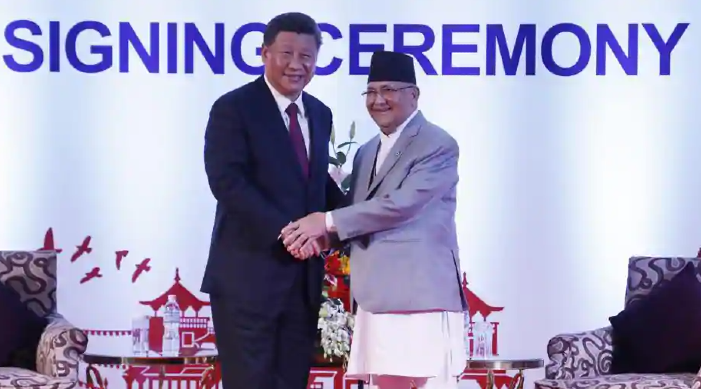 Nepal’s new political map puts the focus back on the differences over India’s boundary over the tri-junction point of Lipulekh, Kalapani and Limpiyadhura

Nepal Prime Minister KP Sharma Oli’s move to release a new political map this week and escalate tensions with New Delhi was designed to consolidate his loosening grip on the party and government, people familiar with the development said on Saturday.

The government’s strategic experts told Hindustan Times that PM Oli appeared to have been driven by three objectives, closely linked to each other, to put out a new political map that placed Kalapani, Limpiyadhura and Lipulekh in Nepal.

One was to consolidate himself in the Nepal Communist Party government where he believed, two former prime ministers Pushpa Kamal Dahal “Prachanda” and Madhav Kumar Nepal had been trying to pull the rug from under him. PM Oli, according to the assessment in New Delhi, has been trying to outdo the two former PMs and it was only after the intervention of Beijing that the three power centres in Nepal’s ruling party agreed to stick together. For now.

Two, the new political map puts the focus back on the differences over India’s boundary over the tri-junction point of Lipulekh, Kalapani and Limpiyadhura in Nepal’s northwest that separates China and the Tibet Autonomous Region to the north and India’s Kumaon to the south.

This effort to put the spotlight also gives China a handle, particularly since it had endorsed India’s position on these territories in 1954 and 2015.

“There is a strong view in the government that there had been a change in Nepal’s pitch and tenor on the boundary question,” a person familiar with the government;s assessment said. It was this view that Army chief General Manoj Mukund Naravane was echoing when he last week underlined that the noisy protests over the 80-km road to Lipulekh for pilgrims to Kailash Mansarovar could be at the behest of “someone else” – a veiled reference to China.

For example, New Delhi was surprised when Nepal had protested India’s map released after splitting Jammu and Kashmir into two union territories, complaining that the map inaccurately showed parts of Nepal to be in India.

“The government hadn’t made a change in the map so far as the boundary with Nepal is in question,” one official said, calling that protest a reflection of Nepal letting China dictate its relations with India.

The third factor, a national security planner, said had a lot to do with China’s growing footprint in Nepal that has caused some unease in the country, and the government. Some of this discomfort often gets reflected on social media also. “But when you whip up ultra-nationalistic sentiments against India, you end up channeling the public resentment from China to target India,” he said.

There have been several instances of the standard Chinese ham handed effort to propagate its belief, culture and projects in Nepal, right from the hard push to popularise Mandarin language to the increasing presence of its enterprises in small and micro-enterprises of Nepal. Local traders in Nepal around its tourist hubs are slowly feeling the heat due to the Chinese presence, an Indian official familiar with the situation in Nepal said..

Of course, the attempt by Chinese companies to palm off sub-standard kits related to the Covid-19 outbreak hasn’t helped either.

The sharp public opinion over quality concerns around Covid-19 kits and protective gear did finally force the Nepal government to cancel the contract.

At an administrative level, a source said, resentment was also building around the slow progress over the mega projects to be built by Chinese companies that China had pushed under its Belt and Road Initiative.

Kathmandu had accepted only 9 of the 35 projects proposed by China including the Kathmandu-Kerung Railway that alone is estimated to cost at least $ 2.3 billion, about 10 percent of Nepal’s GDP. The utility of the railway line, which has been projected to end Nepal’s dependence on India for supplies, has been questioned given that the military strategic mileage would be drawn by China.