Food Park launched in Mizoram; 5000 people in Northeast to get employment 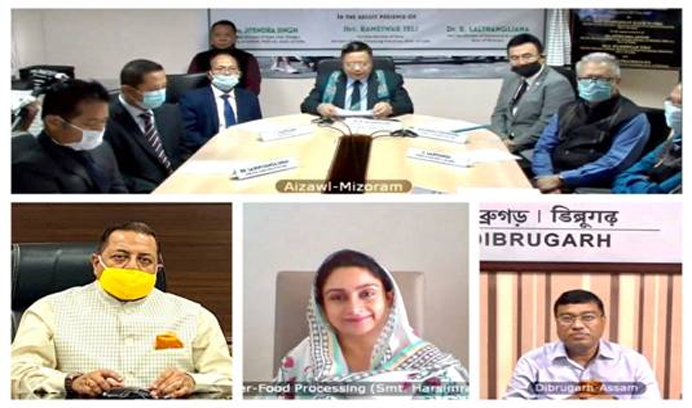 Built at the cost of Rs 75 crore, the Food Park is spread over 55 acres of land

Built at the cost of Rs 75 crore, the Food Park is spread over 55 acres of land. As per the ministry, the project will directly benefit over 25,000 farmers and provide employment opportunities to over 5000 people in the region.

Speaking on the occasion, she said the launch of the park will go a long way in realizing the dream of ‘Atmanirbhar Bharat.’

She said in the last six years 88 projects including 7 in Mizoram initiated for the entire North-Eastern Region with an outlay of Rs1000 crore by her Ministry which will directly benefit 3 lakh farmers and will provide job opportunities to 50,000 youth from the region.

In his remarks as the Guest of Honour, Union Minister of State (Independent Charge) Development of North Eastern Region, Dr Jitendra Singh said the food park will help in doubling the income of farmers in the area by doing away with the middlemen.

Referring to nearly 40 percent wastage of fruits in the absence of any processing unit, the Minister said the rich and high variety of fruits could also be sold as pure packaged juice in major metropolitan cities in India. He said the North-East Region has the potential to become the Organic Destination of the world due to its rich agricultural and horticultural produce. He informed that Sikkim has already been declared as an organic state.

Dr. Jitendra Singh complimented Mizoram for its high literacy rate of about 96 percent, next only to Kerala and for its high disciplinary culture for freeing the state from the insurgency and the drug menace for which the entire civil society and religious organizations worked together.

The Minister also lauded Mizoram for remaining Corona-free till the third lockdown, when some migration happened and some cases cropped up. He expressed the hope that the North-Eastern Region will take a lead for India to emerge as an economic power with the support of its huge natural and human skill resources in the Post-COVID era.

Dr Jitendrta Singh said that Zoram Mega Food Park located near National Highway 54 will help in overcoming the transportation constraints and will soon become a major milestone for the storage and processing of high variety of foods, spices, fruits and vegetables grown in the region.