India, Chile agree to add momentum to their engagement in defence, space and energy sectors 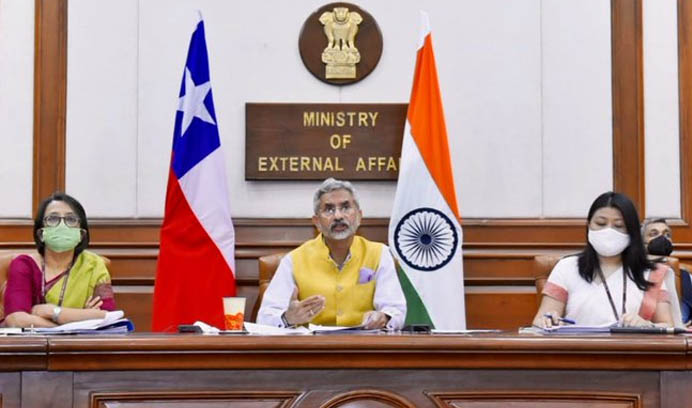 While taking stock of the bilateral relations between India and Chile during their first Joint Commission Meeting held in a virtual format on Friday, New Delhi welcomed Santiago’s decision to designate India as a priority country in its foreign policy.

During the meet which was co-chaired by External Affairs Minister S. Jaishankar and Chile’s Minister of Foreign Affairs, Andrés Allamand Zavala, both sides discussed the future trajectory of their wide-ranging engagements.

“They agreed to add new momentum to the relations of the two countries in the fields of trade and Commerce, agriculture, health and social security, defence, space, science and technology, energy, mining, culture, education, disaster management and cooperation in Antarctica amongst others,” the Ministry of External Affairs said in a press note.

The two sides exchanged views on regional and international issues of mutual interest, especially in the context of the outbreak of COVID-19 pandemic.

The EAM underlined Prime Minister’s vision of Atmanirbhar Bharat for enhancing resilience through self-reliance and human-centric globalization as the basis for India’s economic revival. He invited Chile to take advantage of India’s new economic capacities and growing market.

During the Joint Commission meeting, both sides held discussions on wide ranging issues, including trade and investment.

In March 2020, India and Chile signed the Double Taxation Avoidance Agreement and now both sides are planning to sign a bilateral Investment Protection Treaty.

Both sides also discussed the establishment of an India-Chile Joint Business Council with a view to encourage and facilitate actions leading both country’s business communities to promote cooperation in trade, investment, services and all industrial sectors between the two countries.

During the meeting, the two countries also discussed cooperation on health and export of generic medicines from India to Chile and as per sources, MoU is in final stages in this regard.

The two countries also held a discussion on cooperation in the agriculture sector, which includes market access to products of mutual interest.

As regards, renewable energy, Chile is a member of the International Solar Alliance and it is in the process of ratifying the agreement.

On space cooperation, India and Chile have an agreement for cooperation in the field of exploration and peaceful uses of outer space. Both sides discussed ways to take forward the space cooperation for the benefit of our two peoples. In 2017, India had launched a Chilean Nano-satellite.

The two sides also discussed issues related to liberalisation of visa for Indian businessmen, including multiple and long-term visa. The two leaders also discussed multilateral issues of mutual interest including but not limited to climate change, terrorism, multilateral candidatures, UN and the present COVID-19 pandemic, as well as regional issues.

India and Chile relations are warm and friendly. India´s growth and Chile's economic competencies make us natural partners. Both countries interact with each other bilaterally and also at the multilateral fora.

They share common views on many issues, including climate change, renewable energy and expansion and reform of the UN Security Council.

Both countries have completed 70 years of diplomatic relations with Chile, which was marked by the visit of President Ram Nath Kovind to Santiago on April 1, 2019.

Prime Minister Narendra Modi had interactions with the Chilean President Sebastian Pinera thrice in recent times on the sidelines of G20 meetings in Buenos Aires (2018) and Osaka (2019) as well as G7 in Biarritz (2019).

Chile has a huge base of natural resources which includes copper, tin, forest resources. It has control of a large part of Antarctica and has a very large maritime boundary, having the distinction of being the longest country in the world.

Chile is a country which has engaged extensively with the outside world. It has free trade agreements with a large number of countries and regions. India also has a preferential trade agreement with Chile which was expanded in 2017. This has been helpful in boosting the two-way bilateral trade. Chile is today the fifth largest trading partner of India in the LAC region.

Today’s JCM with Chile was a significant development, being the first institutionalized dialogue between the two countries at the level of foreign ministers. The two sides took stock of the developments in the bilateral relations, consequent to the visit of President Kobind and discussed issues on various sectors. India welcomed Chile’s decision to open a Consulate General in Mumbai.