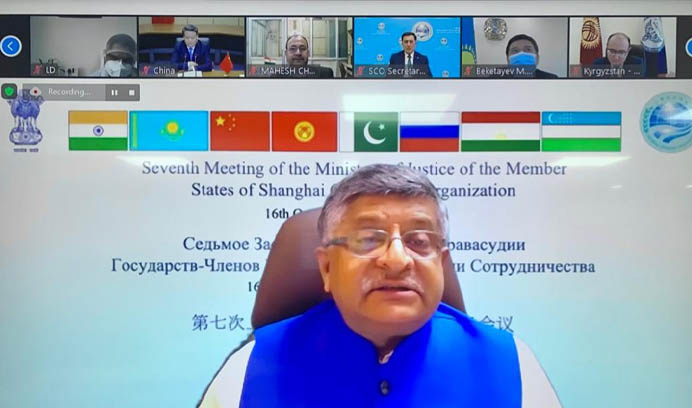 Over 25 lakh hearings were conducted through video conferencing across the courts of India during the COVID-19 pandemic, including 9,000 in the Supreme Court alone, Union Minister of Law and Justice, Ravi Shankar Prasad said on Friday.

Hosting the Seventh Meeting of Ministers of Justice of the Shanghai Cooperation Organisation (SCO) Member States, Prasad also talked about the e-Courts projects with Video-Conferencing facility and rolling out of Virtual Courts.

These were a part of “Government’s successful transformative change in process automation from the conventional brick and mortar court architecture,” he pointed out.

Speaking at the virtual event, Prasad called on the international community to promote the exchange of ideas, best practices and experiences in identified areas through the platform of the SCO Meet.

The law minister outlined the initiatives taken by Prime Minister Narendra Modi to provide affordable and easy access to justice for all.

The Minister highlighted the Pro Bono Legal Services provide free legal aid to the marginalised sections of the society. He said that through Tele-Law services which were initiated in 2017 have so far provided free consultations to 3.44 lakh people through video conferencing.

Addressing the member countries to invest in India, he said India has eased the business laws in the country including Commercial Courts Act and Arbitration Laws with a view to make India a preferred destination for investment and business.

The conference was attended by the Justice minister and experts from India, Kazakhstan, China, Kyrgyz Republic, Pakistan, Russian Federation, Tajikistan and Uzbekistan participated in the three days deliberations.

The members later released a joint statement agreeing to continue work on strengthening the agreements already in place between the countries. These included the Agreement on Cooperation between the Ministries of Justice of the SCO Member States (Dushanbe, 18 August 2015).

The ministers agreed to implement the Action Plans of the working groups of experts on forensic activities and legal services for 2018-2020, as well as to develop Action Plans for 2021-2023.

The parties also agreed on bringing a system to enable exchange programs for representatives of the law and justice ministries to study the best practices in alternative dispute resolution.

Creation of an online platform for the exchange of legal information as per the laws of each country was also discussed upon.