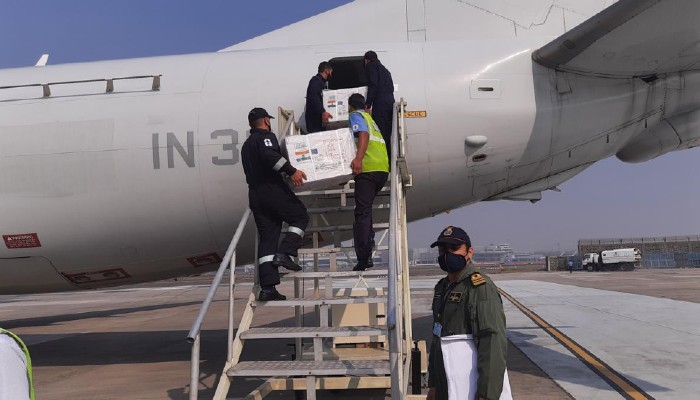 In consonance with an outreach, which could be inimitable in the world in both substance and symbolism, India has sent a consignment of 100,000 (1 lakh) doses of COVISHIELD vaccine to Mauritius. It is expected to arrive in this Indian Ocean country on Friday.

India’s vaccine diplomacy or VaccineMaitri demonstrates India’s role as a reliable partner and a net provider of humanitarian assistance in the Indian Ocean region. Mauritius also lies at the heart of India’s vision of ‘SAGAR – Security and Growth for All in the Region’.

Mauritius has a population of less than 1.3 million inhabitants and is highly dependent on external trade and tourism and hospitality industry which has been severely impacted by the Covid-19 pandemic.

The request for supply of Indian vaccines has been made from the highest level in the Mauritius Government. The donation of 1 lakh doses of Covishield vaccines to Mauritius will cover vaccination requirements of a considerable percentage of its frontline medical workers and will play a vital role in complementing its ongoing recovery plans from the effects of the pandemic.

Since the beginning of the Covid pandemic, India has extended steadfast support to Mauritius in dealing with the crisis. Mauritius was amongst the first and largest beneficiaries of India’s Covid related assistance.

Under Mission SAGAR, India had supplied 13 tonnes of essential medicines and 10 tonnes of Ayurvedic medicines to Mauritius in April-May 2020.

Mauritius was also only among the three IOR countries where a special Indian Medical Assistance Team deployed to supplement local government’s efforts against Covid-19 pandemic (the others being Maldives and Comoros).

Driven by the close engagement between the leaderships and strong people-to-people ties, India’s relation with Mauritius has strengthened rapidly in recent times. Indian development assistance is a cornerstone of this relationship.

In August 2020, India was a first responder assisting Mauritius in dealing with the environmental crisis due to oil spill on its south-east Coast due to the grounding of MV Wakashio, a bulk carrier. Over 30 tonnes of technical equipment and material on board an IAF Aircraft was sent to Mauritius by India to assist in the oil spill containment and salvage operations. A 10-member technical response team, consisting of Indian Coast Guard (ICG) personnel specially trained for dealing with oil spill containment measures, was also deployed to Mauritius.