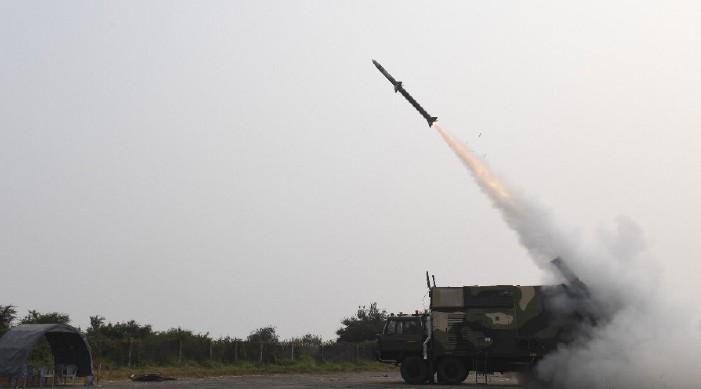 India has achieved yet another milestone in countering all kinds of fast moving aerial threats, especially low level, by successfully conducting maiden test of next generation surface to air Akash missile, called as Akash-NG missile by the Defence Research and Development Organisation.

Since the future wars will be mainly fought in the skies, the development of such a latest generation air defence system by the DRDO will enthuse Indian armed forces.

This is significant as enemy offensive systems like aircrafts, missiles, drones fly at tree top level to evade the prying eyes of the defensive radars, which assist the anti- aircraft and anti-missile systems to challenge them.

The Akash NG will make it difficult for the enemy aerial systems to intrude into Indian air space. The latest systems will be deployed to protect big cities and high profile strategic targets. It will be another feather in an ambitious program to make India self- reliant in modern generation defence systems.

A step further in achieving the goals of Atmanirbhar Bharat, i.e. self- reliant India, the latest success will project India as a missile power, which is continuously adding newer versions of offensive and defensive missile systems on its own scientific and technological prowess. With the successful launch of Akash-NG missile, India will join the select group of advanced nations with such new generation technologies.

The development program of Akash missile was originally initiated in 1983 under the Integrated Missile Development Program under the leadership of India’s missile man and ex-President, Dr APJ Abdul Kalam.

The Akash-NG missile was under development since last few years, and after it’s maiden Monday launch from the Integrated Test Range off the Coast of Odisha, will significantly add new dimension to Indian armed forces defensive capabilities.

The present Akash missile,which is already in service with the Indian Air Force can hit an aerial target from the surface till a distance of 25-km in air, but Indian armed forces require a comprehensive defensive system which can engage low flying systems like Babur Cruise Missile of Pakistan and similar Chinese offensive systems.

The DRDO said, after successfully launching the Akash-NG missile that it intercepted the aerial target with textbook precision. The launch met all the test objectives by performing high maneuvers during the trajectory.

The DRDO claimed that the performance of the command and control system, on-board avionics and aerodynamic configuration of the missile was successfully validated during the trial.

During the test launch the entire flight path of the missile was monitored and the flight data was captured by various Range instruments such as Radar, EOTS and Telemetry systems deployed by Interim Test Range , Chandipur.

The significance of Akash-NG missile system is that it has been developed with better deployability compared with other systems with canisterized launcher and much smaller ground system footprint.

The test launch was overseen by experts of the DRDO, the Bharat Dynamics and the Bharat Electronics Limited in the presence of senior officials of the Indian Air Force.

The current generation Air Defence Akash missile has proved to be the backbone of India’s air defence and now the next generation Akash-NG missile will add a new punch to defense capabilities of the Indian Air Force.

Since Akash missile has already bagged export orders, it is expected that the latest Akash-NG missile will propel India to the ranks of exporters of the most advanced weapon systems.