Removal of 370 integrates Kashmir with India 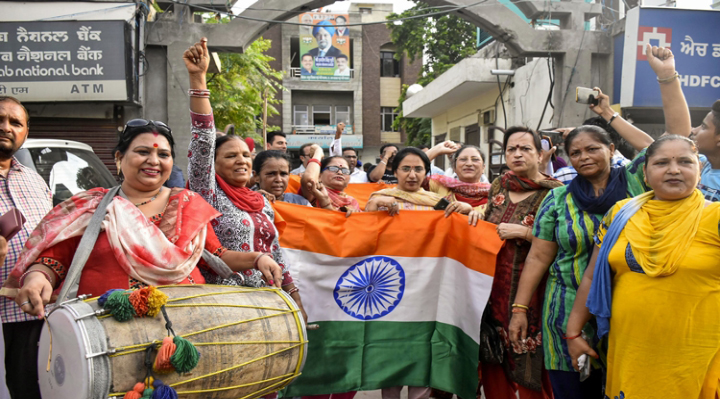 The wall of Article 370 was like the “invisible Berlin Wall”, only more tyrannical and diabolical in its impact

One need look no further than the generational impact of Article 370. It simply did not allow the people to people bond, to build and flourish.

The insulation provided by Article 370 meant many Indian constitutional provisions and laws did not apply to the state. As a result, Jammu and Kashmir and the rest of India traveled on different tracks – politically, but also in economic transformation and social modernization. This led to resentment in Ladakh and Jammu as they felt the status quo was gamed to benefit the Kashmir Valley alone, writes Ashok Malik, Policy Advisor to the Ministry of External Affairs with rank of additional secretary.

Syama Prasad Mookerjee, founder of the Bharatiya Jana Sangh, gave up his life fighting against Article 370. Atal Bihari Vajpayee, then a feisty young leader, while speaking in the Lok Sabha in 1968, correctly predicted the disastrous consequences of keeping this divisive provision in the Constitution. Narendra Modi, then a young party activist, organised a series of public events in the 1990s, the most famous among them the Tiranga Yatra of 1993, each dedicated to the mission of fully integrating the region of Jammu and Kashmir. Sushma Swaraj’s last public message, now etched in eternity, was one of thanking Prime Minister Modi for fulfilling a long-cherished dream in her lifetime. BJP is now, for the first time in its existence, close to a working majority in the Rajya Sabha. And the first major decision taken by PM Modi when this milestone was achieved, was to abrogate Article 370.

There is an inherent romanticism in the dedication of generations of political workers and leaders to the cause of nation building. As history has shown, it is the unwavering commitment of such romantics that changes the course of history.

To understand why Article 370 has been such a bone of contention for generations of nation builders, one has to understand the impact of this provision. The physical territory of Jammu and Kashmir merged with India in 1947. But what Article 370 ensured was that the people were, almost by design, prevented from integrating with the life-blood of the national mainstream. The state was physically located next to two Indian states, but for all practical purposes it could have been located in another continent. Nations bond and unite over time due to the unhindered flow of people, trade, ideas, customs, food, festivals, culture and attire. This melting pot of building the modern Indian Republic went exactly as per the script the founding fathers envisioned. The fissiparous tendencies that some regions in the south or the northeast experienced during the early decades of Independence have all but vanished. The only region that has stood as an exception to this unifying impulse is the one which was deliberately kept away by the machinations of Jawaharlal Nehru and Sheikh Abdullah.

For 70 years, the people in Kashmir and other parts of the country simply did not get to know each other. The consequences of this reality manifested in a rather unexpected way in the winter of 2005. The region of Kashmir had just been ravaged by a devastating earthquake. While the Indian state responded with all the resources at its command, the response from the people and civil society was rather lukewarm. This was surprising given that people from all across the country had mobilised in large numbers, only recently, to help the suffering people in the wake of Tsunami of 2004. Many were bewildered at this phenomenon and indeed this question was asked in many articles. Why was it that people living in Uttar Pradesh or Punjab felt more empathetic towards people living far down to the south than to their more immediate neighbour to the north? Adding to the puzzle was another dimension — what was it about Kashmir that the same people who were willing to go to war for the land did not display the same empathy when it came to helping the people during the time of a natural disaster?

One need look no further than the generational impact of Article 370. It simply did not allow the people to people bond, to build and flourish. For the people living in other parts of the country, they had no live experience of knowing and growing up with a Kashmiri as a neighbour or a friend or a colleague. The process of being emotionally vested in each other simply did not take place. For the people of Kashmir, their primary exposure to India was not the Indian people but the organs of the Indian state. It was natural, then, that the gulf would only widen over the years.

Article 370 was supposed to give special status to the region of Kashmir. In reality, what it delivered was just a piece of land. The instrument conceived by Nehru was more devastating in its consequences than the Berlin Wall. The physical presence of that wall struck out in its obscenity each day. The wall of Article 370 was like the “invisible Berlin Wall”, only more tyrannical and diabolical in its impact. What Narendra Modi has done by tearing down the Article 370 wall, 30 years after the fall of Berlin Wall, is that for the first time in independent India a signal has been sent that the Indian national project in Kashmir is about the people and not just the land.

The land was physically with India anyway, with or without Article 370. With the obliteration of the divisive instrument, the people have also now finally become one. Federal Home Minister Amit Shah, the man who piloted the move in Parliament and Prime Minister Narendra Modi will go down in history as the two who broke the shackles of 70 years of failed policy and brought about a new dawn.