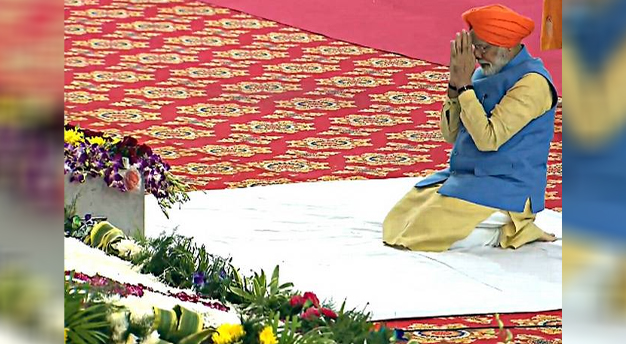 While inaugurating the Kartarpur Sahib Corridor, Indian Prime Minister Narendra Damodardas Modi did not forget to express his gratitude to his Pakistani counterpart - indeed, a nice gesture on the part of the Indian premier. This is his statesmanship that despite Pakistan’s blatant violations of ceasefire and fomenting internal disturbances time and again through sleeper cells, sponsoring terrorism and instigating communal riots, Modi continues to display friendly gesture. He started it virtually in his true element as a statesman when he took several initiatives to befriend Pakistan in order to give peace and tranquillity in the region a chance to usher in when he took the oath of office as the Prime Minister of India for the first time itself. The Pakistani response has, however, almost always been mischievous, pejorative and full of, as it were, vandalism. Why does Pakistan behave in this perennial fashion of functioning past contradiction upon contradictions with confounded confusions? Why this failed state is not able to respond in a normal way of any other normal neighbourhood? Why this country is not able to act like a true sovereign State?

It appears that Pakistan has evolved a deeply-rooted feudalistic diplomatic pattern in international politics. If it is not so then there are multiple centres of power in ‘napaak’ Pakistan with Mullahs/Molvis, ‘internationally sought after’ terror groups and terrorists, drug smugglers, feudal lords, local and international mafia and Inter-Services Intelligence (ISI) in addition to apparently legitimate leaders and mutually fighting groups within the precincts of government and echelons of “corridors of power”. That is why Pakistan is able to pursue its state policy of terrorism more profusely than the path of development and welfare of citizens of the country. It has also come to light that Pakistan is able to print duplicate currency of almost every country that matters in the world today. This is also done to support and incite mercenary and local youth for terrorism. Indeed, Pakistan is moving towards a full-scale civil war under this situation.

India’s scene is that of great accomplishments, especially during the last 66 months. Corruption is receding at different levels. Communal riots have also reduced in numbers and range. E-governance is proving even more effective for service of the people. Right to Information (RTI) is transforming public authorities towards providing more responsive and efficient government despite quite a few lacunae in this regard. Only sporadic incidents of terrorism are occurring mainly in the southern parts of Kashmir. Larger India is almost completely free from terrorist violence.

Above all, such gargantuan challenges and crises, like the temple dispute of Ayodhya, the so-called Kashmir issue and Shri Kartarpur Corridor, all stand resolved from Indian perspective. It is a decisive and initiative taking government that is there in India after an interregnum of so many decades. India is having a Prime Minister who is seriously thinking about the nation in terms of the ancient concept of a Rashtra (Nation-State), and not like the limited notion of a ‘nation’ held by the West. There is yet another positive democratic nation-wide transformation. Elections in recent times have also seen voting across caste and religious limitations and factions. This may be regarded as a massive social and political revolution in Indian polity.

One of the greatest achievements for India must be seen in the intrinsically non-political and disciplined nature of the armed forces. They do everything whatever they are asked for. This, in addition to others, has been a major reason why Indian democracy has been scripting a vibrant success story. One black scar on the Indian democracy has been the Emergency between 1975 and 1977. Yet, the Indian citizens and leaders learnt the necessary lessons from this black period.

Pakistan, on the other hand, is de-learning its lessons from dictatorial regimes. Pakistan is giving to the world a new concept of peoples rule in the form of “proxy army democracy” or “military-democracy” quite like the “democracy of the dictatorship of the proletariat”. In Pakistan, it is military-politics, military-culture, military-economy and military-business, etc. Clearly, Pakistanis are very fond of “proxies” including “proxy-wars”. Pak armed forces are known to be merciless, atrocious and ‘napaak’ for their own citizens. Instances are seen in Baluchistan, Pakhtunkhwa, Sindh, Gilgit-Baltistan and also in the main cities and villages of Pakistan.

The most interesting part of Indian democracy is in its peaceful revolutions launched by the Government while involving voluntary gigantic participation of her citizens. The Swachtha Abhiyaan and also Right to Information are among a few examples of such social and political revolutions. These are bringing real desirable changes in Indian socio-political ethos.

Thus, this is the high time when a country like Pakistan must unconditionally and voluntarily surrender to Indians in favour of their short-term and long-term four-fold ‘salvation’. Otherwise, to paraphrase Plato, cities will never have rest from their evils there.