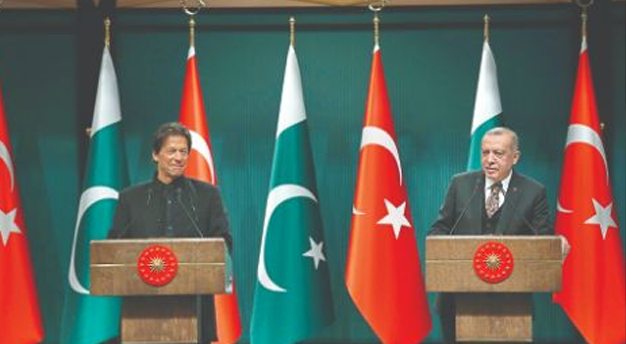 While Turkey and Pakistan vilify India regarding injustices committed against Kashmiris, the international community must remind them of their own track record

There was immense and visible gratification in Armenia in the wake of the US House of Representatives passing a momentous resolution (October 29) recognising mass killings of innocent Armenians by the Turkish forces, a century ago. It was also described as a full-fledged genocide. The US House of representatives voted 405 to 11 in support of the motion to commemorate the Armenian carnage by according an official recognition and remembrance. The resolution further stated that the killing of 1.5 million Armenians by the Ottoman empire between 1915 and 1923 amounted to a genocide.


This resolution, as anticipated, angered Turkish President, Erdogan who insisted that many Turkish people also perished during the alleged genocide and it was unfair to blame Turkey alone for the incident. Such a reaction on part of Erdogan, coming on the heels of plummeting US-Turkish relations, is bound to take a battering in the International context. Turkey is already reeling under the taint of its bloody and indiscriminate killings of the Kurds, particularly during its handling of the ISIS crisis in recent weeks when the unarmed Kurds were left to fend for themselves after the US withdrew, rather abruptly. Earlier too, Turkish forces have been perpetrating terror and inhuman acts against the Kurds for some time.

Significantly, Prime Minister Modi did a diplomatically sound job by meeting the Armenian Head of State on the sidelines of UN General Assembly meeting and drew global attention for Turkish annexation and atrocities against the Armenians. Similar articulation was noted when he met the Greek Prime Minister and quoted from history about Turkish excesses. It would seem that both Armenia and Greece are with India to target Turkey and possibly mount pressure on Erdogan to tone down his rhetoric against India. He is obviously living in a fool's paradise in singling out India for its so-called excesses in Kashmir. This is more unbecoming of his stature as fresh and credible reports suggest that Turkey, as quid pro quo, has received nuclear-related assistance from Pakistan to extend support for the Kashmir cause. This is indeed disturbing and merits intervention of the international community to discipline Turkey for its nonsensical approach towards issues of grave importance.

In light of the recent US resolution on Armenia, it would appear imperative on part of India to vigorously befriend Armenia anew to jointly put Turkey on the defensive. Armenia and India have had excellent relations for a long time. History records that Armenians had been frequenting India for the last 2500 years and their representatives had their presence in the court of Mughal King, Akbar who helped in establishing Armenian Churches in various parts of India. Kolkata has around 150 Armenians and they have been well-integrated into Indian society, enjoying religious freedom and other liberal activities. The Armenian Church in Kolkata is an attraction and the local Armenians observed the genocide or Remembrance Day recalling the atrocities of the Ottoman Empire, 100 years ago. With a comfortable bonding with Armenia, a new chapter between the two countries seems essential to forging new ties.

Now that all the perpetrators of the crime against humanity are being accounted for, it is extremely important to focus on excesses in Bangladesh committed by Pakistan in the run-up to the former's liberation struggle in 1971. The Pakistan Army notoriously killed millions of innocent Bangladeshis amounting to a genocide of inhuman proportions. They also resorted to countless rapes and violation of women. Seldom has such a macabre mass killing been recorded in the annals of human history. Since Pakistan is shedding crocodile tears over the alleged plight of the Kashmiris, it is incumbent upon the world leaders to question Pakistan for its most grotesque role in exterminating Bengalis in 1970-71.

Furthermore, Pakistan should be held universally responsible for the genocide committed. This issue has been raised time and again in international forums but unfortunately, all the pleas have gone unheeded. It is now time to mount pressure on Pakistan to explain the taint on its hands of such mass murders so that it does some soul searching before blaming India for any high-handedness. China too needs to be accounted for, for its continued excesses against the Uighur Muslims. Pakistan is in cahoot with China in keeping mum on the atrocities against its Muslim brethren. Shantanu Mukharji is a retired IPS officer, a security analyst and a former National Security Advisor to the Prime Minister of Mauritius. Views expressed are strictly personal