Decision changes the dynamics of the India-Pakistan dialogue on Kashmir 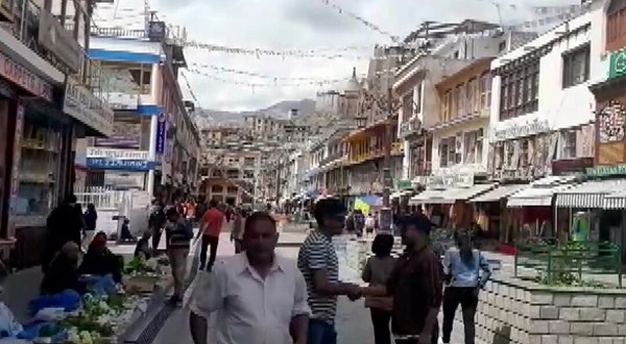 A general view of the market after the revoking of Article 370 in Jammu and Kashmir, in Leh on Monday. (Photo: ANI)

A bold and historic decision has been taken by the government to scrap Article 370/Article 35A, separating Ladakh from Jammu and Kashmir, to make both Union territories. No one really expected this decision so rapidly after the Bharatiya Janata Party’s (BJP’s) electoral victory, and especially such a far-reaching one. The government has obviously calculated all the consequences of this epochal decision, both internal and external. Even if there are difficulties down the road, essentially internal, these will be overcome in due course and a historical mistake in keeping Kashmir separate and entrenching separatism in the polity at the nation’s cost will have been corrected.

Pakistan must be stunned by the Narendra Modi government’s decision. It changes completely the dynamics of the India-Pakistan dialogue on Kashmir. For too long India has adopted a defensive approach on Kashmir, accepting talks on the “outstanding issue" of Jammu and Kashmir, tolerating terrorism in order to keep the bilateral dialogue alive. Now that Kashmir’s internal status in India has been radically changed and it has become a Union territory, and Ladakh has been separated from it, the basis of a bilateral dialogue with Pakistan on the issue has disappeared. For India, there is now no “outstanding" issue of Kashmir except India’s claim on Pakistan-occupied Kashmir (PoK), which includes Gilgit-Baltistan. The need for a back-channel to find a solution to the Kashmir issue has disappeared. The so-called four point formula, which has supporters in Indian circles, has lost all meaning. All talk of a resumed dialogue with Pakistan with a structured agenda, which has Kashmir on it, has become pointless. The Modi government’s decision will also have effect on the Indus Waters Treaty and Pakistan’s strategy of creating obstacles for Indian power projects in Jammu and Kashmir permitted by the treaty.

All in all, the prospects of any early “normalization" of ties with Pakistan have receded. The ball will lie in Pakistan’s court as it has been principally responsible over the years for the state of our bilateral relations. It is unlikely that after having been outflanked by the Modi government on Kashmir it will change its policies towards India. Its political frustration and domestic pressures will compel it to seek an internationalizing of India’s decision.


Imran Khan has, according to the Pakistan government, already “invited attention of world leaders and international bodies towards irresponsible, unilateral and irrational behaviour of the Indian leadership". Pakistan has warned that it will exercise all possible options against India’s “illegal" steps.

Pakistan has propagandist options, but no substantial ones. It can try to foment resistance within the valley to India’s decision and step up terrorism in J&K. This will be risky as support to jihadi activities in J&K will allow India to increase pressure on Pakistan in the Financial Action Task Force (FATF), besides the danger of retaliation from India, which Pakistan can ill afford in view of its distressed economic situation. Pakistan will, of course, raise the matter with the United Nations (UN) Secretary General, who might be persuaded to issue some statement advocating reduction of tensions and peaceful settlement of differences, etc., but a change in India’s domestic law on J&K’s status within the Indian Union is not an international matter as it does not endanger international peace and security. More importantly, Article 370 does not figure in any UN resolution on Kashmir. It was inserted in the Indian Constitution in 1954 unilaterally by India, many years after the UN resolutions on J&K and, so, it can be unilaterally removed.


The UN Security Council will not take cognizance of any Pakistani complaint. All major powers have adopted the position that the Kashmir issue should be settled bilaterally between India and Pakistan. The Simla Agreement supports that position. No major country would want to risk its ties with a rising India for Pakistan’s sake. They are habituated to India-Pakistan differences on Kashmir and would avoid getting involved. Pakistan will argue that the tensions India is creating in Kashmir will distract Pakistan from its support to the US on Afghanistan. The US and the UK in particular may raise the subject in private, more to understand the likely scenario in the future, than injecting themselves into the situation.