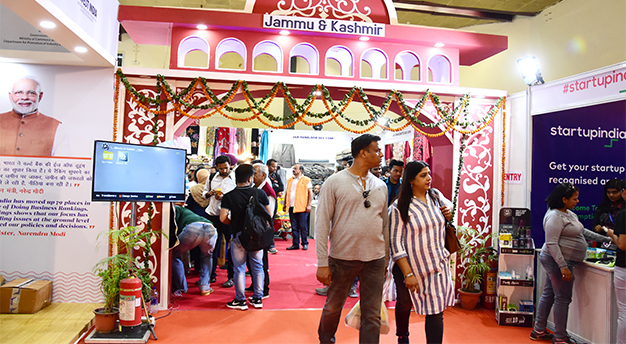 Despite being apprehensive and skeptical, moods of artisans and traders are upbeat in the 39th edition of the India International Trade Fair


The euphoria is palpable. The news of all major restrictions being lifted and complete normalcy being restored to life in the Valley is finding echo at the Kashmir pavilion at the ongoing India International Trade Fair (IIFT) in Pragati Maidan in the national capital. Undoubtedly, life has changed since August 5, the day Article 370 was scrapped. A feeling of happiness over the life getting normalised and facilities being restored back home in Jammu and Kashmir is all evident.

Though, tucked away behind the ‘Ease of Doing Business’ pavilion at the India International Trade Fair are around 10 traders from Jammu and Kashmir. No longer a state, the J&K pavilion has been relegated to a unit that has little to do with trade. Yet the optimism reigns supreme among the craftsmen having stalls in the pavilion set up by the J&K government to showcase their products and achievements in handicraft and handloom sectors.

According to an official spokesperson, as many as five government departments/corporations including the Department of Handloom, Handicraft, Industries, Women Development Corporation have set up their stalls in an attractive manner to showcase their products. The trade fair which will continue up to November 27 has been represented by eight artisans of different departments. The special attraction of the fair is the live demonstration by the craftsmen of all the three regions of the erstwhile state.

High-quality products including shawls, carpets, papiermache, saffron, and dry fruit are available in the fair.

“Things have changed a lot since August 5 when Article 370 was finally abrogated. Shops are opening up, public transport system is getting restored, so we expect better days ahead. But as of now, life has been difficult,” says Imtiaz Khan who claims to be residing in Delhi for last 20 days in order to participate in the international trade fair.

Same sentiment is echoed by 40-year-old Sheikh Riyaz, a shop owner from Lal Bazar in Srinagar. “We used to do good business earlier in the state pavilion. Now they’ve hidden us away. Maybe it is because of security reasons,” says Ashaq Hussain from Srinagar. Hussain left the Valley, where he runs a family-owned shawl business with around 200 artisans, around five days before the trade fair started. He does so every year, but there was a change of plans this year. “We will cut short our visit here and skip Rajasthan. Mahaul theek nahin hai (atmosphere is not good). Even on a weekend, the section is nearly empty,” he says.

But Ajaz Mohd Mir, a trader from Jammu, expresses absolute pragmatism. His contention is simple: “I believe in what our Home Minister Amit Shah had promised that there will be a complete turn around in the scenario and that a wave of development activities will take over Kashmir. There is no point in doubting Amit Shah. Wait and watch. Kashmir ki sthiti jannat wali hogi, Inshallah” (God willing, Kashmir will be like heaven)!

The actual reason behind the Kashmir pavilion failing to get space at prime location in the ongoing IITF is explained by J&K government official posted at the pavilion, Riaz Ahmed, who himself hails from Srinagar. “Actually what happened is that due to disruption in the communication system, an impression was formed that we would be missing the IITF this time. It seemed imminent but the government and the artisans were determined to participate in it at any cost. And you can see the mood is upbeat. Despite various handicaps, we are camping here and doing good business, undoubtedly,” Riaz emphasises.

In the meantime, the director of handicrafts comes calling and urges the participants to ensure that only genuine products of the state are displayed during the exhibition.

Despite being far away from families living under not-so-normal state of affairs back home in Jammu and Kashmir for weeks, the feeling of satisfaction and optimistic sentiment exuded by them are really commendable. One must always be optimistic in one's thoughts and hope for the best.