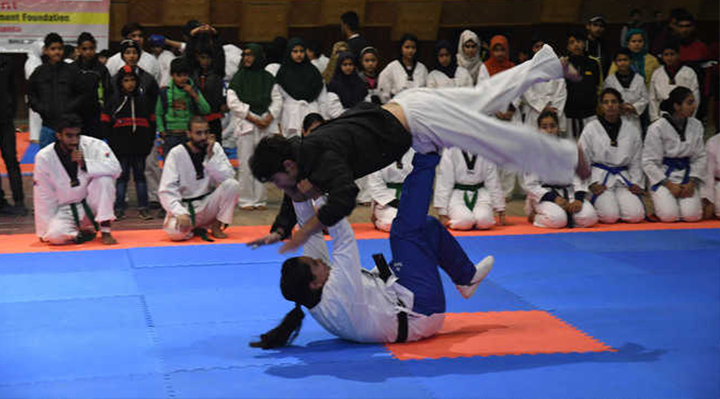 The first martial arts tournament at the Indoor Stadium after J&K was made UT, began in Srinagar with aim to connect youth with mainstream

Though it was a sports event, a performance of a live band at the inaugural function drew loud cheers from a mostly young crowd of around 400 people on a cold Tuesday morning. During musical performances and martial arts demos, BJP national vice-president Avinash Rai Khanna and other party leaders remained present on the dais and the anchors proclaimed that the event would “engage youth with mainland India”.

Other speakers like Divisional Commissioner, Kashmir, Baseer Khan and IGP Ravideep Singh Sahi at the event organised by the Jammu and Kashmir Development Foundation (JKDF), too, talked about how the event would bring peace in the Valley where normal life continues to remain affected since August 5, when Article 370 was abrogated.

A banner at the stadium stated in bold that the event was “promoted” by Khanna but the BJP said it was apolitical.