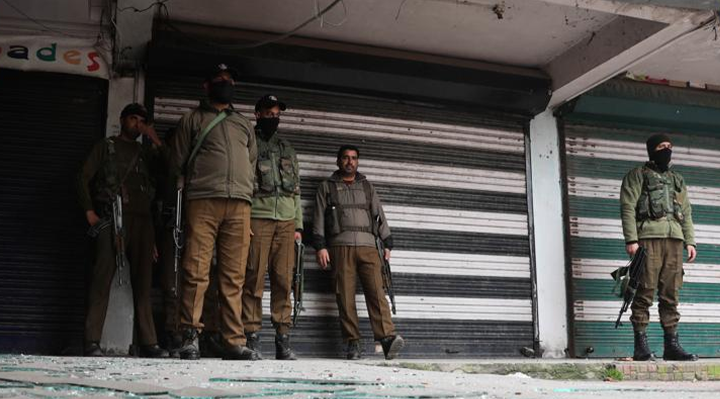 Unidentified terrorists killed a sarpanch and a local administration official in South Kashmir’s Anantnag on Tuesday as they targeted a prominent government outreach programme for which several people had gathered at a panchayat house.

The suspects lobbed grenades and opened indiscriminate fire on the gathering, in which seven people sustained injuries, according to locals. Two of them had succumbed to injuries later at a hospital.

“Under the back-to-village programme, locals and officials were in the village when the attack took place. A village sarpanch and a government employee were killed,” said assistant commissioner development, Anantnag, Mohammad Aslam.

The second phase of the “back to village” programme was launched by the Union Territory administration this week after the first Lt Governor of Jammu & Kashmir, GC Murmu, said 5,000 officers will reach out to the people in each panchayat.

This is the first big government outreach since the state was bifurcated into two Union Territories – J&K and Ladakh -- on August 5.

The village sarpanch was identified as Rafiq Shah and the government employee as Zahoor Ahmed Sheikh.

Soon after the attack, army and police arrived on the spot and launched a search operation. Sources in the government said that after the attack, directions have been passed to all officials to secure places where the back to village programmes are being organised.

The first phase was launched in June when J&K was a full-fledged state and the then J&K governor, Satya Pal Malik, described the programme as an outreach for people in far-off villages.

In Srinagar city, an explosion took place in the market near Sir Syed gate of Kashmir University in Hazratbal area on Tuesday afternoon, officials said, according to PTI. Three persons were injured in the explosion. All are stated to be stable. The official said the explosion was not caused by a grenade as suspected earlier. Preliminary investigation suggests that it was a low-intensity blast.

Reports also said that some markets and shops reopened on Tuesday briefly, bringing some semblance of normalcy to the Srinagar Valley where people have protested against the Union government’s decision to take away the region’s special constitutional status and divide the state into two union territories.

Restrictions on communications in Kashmir have continued since August 4 and several political leaders, including former chief ministers, continue to be under house arrest over what the administration says are curbs to ensure security.

The matter is in the Supreme Court where the central government defended the restrictions afresh on Tuesday. The petitioners said that if the reasons cited by the government are found acceptable by the Supreme Court, it will have grave consequences for the rest of the nation.

“If their interpretation of Article 19 is accepted, it will become worse than ADM Jabalpur (case). Tomorrow it can happen anywhere. If there are upcoming elections, they can impose Section 144 and shut down all communication,” said Kapil Sibal, who was appearing for Congress leader Ghulam Nabi Azad.

A bench of Justices NV Ramana, R Subhash Reddy and BR Gavai is hearing a batch of petitions challenging the restrictions. Responding to the petitioners, the Central government through Solicitor General Tushar Mehta told the court that misuse of social media and internet by separatists and military and political leaders of Pakistan had necessitated curbs on internet.