Why Sinha does what he is doing 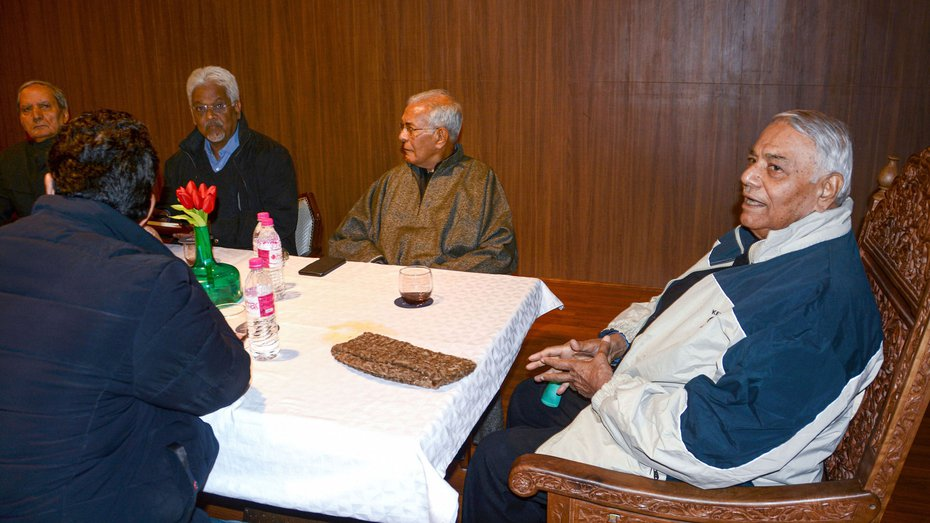 That Yashwant Sinha, a former union minister, is an erudite and experienced leader is beyond doubts. That Sinha, now 82, is over the hills as a politician and has walked into the political oblivion is also not in doubt. But what perplexes all and sundry is why should he become so critical of a party with which he had been associated for over two decades.

Sinha was in the news recently for all the wrong reasons. He went to Srinagar last week as the leader of a civil society group to study the ground situation in the Kashmir Valley and declared that the situation in the Valley was not normal.

The point in question here is, none, not even in one’s wildest dreams, could have expected that the three-decade-old Pakistan-sponsored Kashmir militancy would get eradicated with a magic wand within three months of the abrogation of Article 370 that gave the erstwhile state of Jammu and Kashmir special status within India’s federal structure. Having served as India’s foreign minister in the Atal Bihari Vajpayee government between 2002 and 2004, Sinha cannot be so naive as to expect Kashmir Valley would have become heaven overnight.

It is clear that the sole motive of the former minister was to peddle in the muddy water, take the incumbent Narendra Modi government to task for very obvious reasons and get back into the news. As foreign minister, did not Sinha know eradication of militancy required patience, planning and some firm decisions? The challenge before the Indian authorities was to either let the situation drift or take the situation under a firm grip. The Modi government opted for the latter, though it was a tough choice.

Unlike many other politicians, who were either not allowed to visit the Valley or stopped at the Srinagar airport, Sinha and the self-proclaimed conscience keepers of the Indian society were allowed to visit Srinagar. However, they were prevented by the local authorities to visit areas like Baaramulla, citing security reasons, which might not have pleased him. This led to Sinha showering a series of allegations and blames on the Modi government.

Now let’s examine the nativity of some of Sinha’s statements point by point:

“No state deserves to be bifurcated,” Sinha said while interacting with the media in Srinagar.

The point is, why not, when India could be bifurcated, Punjab was trifurcated and Uttar Pradesh, Madhya Pradesh, and Bihar were bifurcated as late as in the year 2000-2001? Was it admission on Sinha’s part that he was opposed to the bifurcation of his home state when Jharkhand was carved out of Bihar while he served as a senior cabinet minister in the Vajpayee government? If it was so, did he record a dissent note in the cabinet meeting? No, he did not.
Now, let’s focus on his second statement: “The decision to revoke special status wasn't right.”

If one knows Indian politics, one is expected to know that the ruling Bharatiya Janata Party (BJP) even in its previous incarnations as the Bharatiya Jana Sangh was opposed to the gift of Article 370 to Jammu and Kashmir. Jana Sangh founder Shyama Prasad Mookerjee sacrificed his life while opposing Article 370. Mookerjee termed Article 370 as Balkanisation of India and the acceptance of the three-nation theory of Shaikh Abdullah. Mookerjee led a massive mass protest and was detained by the then Shaikh Abdullah government on May 11, 1953, when he crossed into the Jammu and Kashmir state. And in just over a month, Mookherjee died in detention under mysterious circumstances.

Sinha was actively associated with the BJP until 2014 and held several positions in the party and its government at the centre. He is expected to know that abrogation of Article 370 was a core issue of the BJP under its slogan One India One Constitution. Does it mean that Sinha accepted BJP ideology when it suited him and has turned critical only when the BJP has slammed its doors on him?

BJP slamming the door on Sinha is the only probable reason for the former minister becoming a critic of the government. He may have his own reasons to grind his ax with the BJP. Sinha was dreaming of becoming the prime minister but in the Modi era, he was not even considered worthy of becoming a minister. His parliamentarian son Jayant Sinha was preferred by Modi and was appointed a junior minister in the government, but it failed to stop senior Sinha from starting to drift away from the party.

It is imperative for Yashwant Sinha to remember even at the twilight zone of his life that there is only a wafer-thin difference between being anti-government and anti-India. Criticising his erstwhile party and its government at the centre is fine, but what Sinha did and said during his Srinagar visit was more of anti-India rants in nature.