Protests, sloganeering over, it’s time for mesmerizing voices of kids 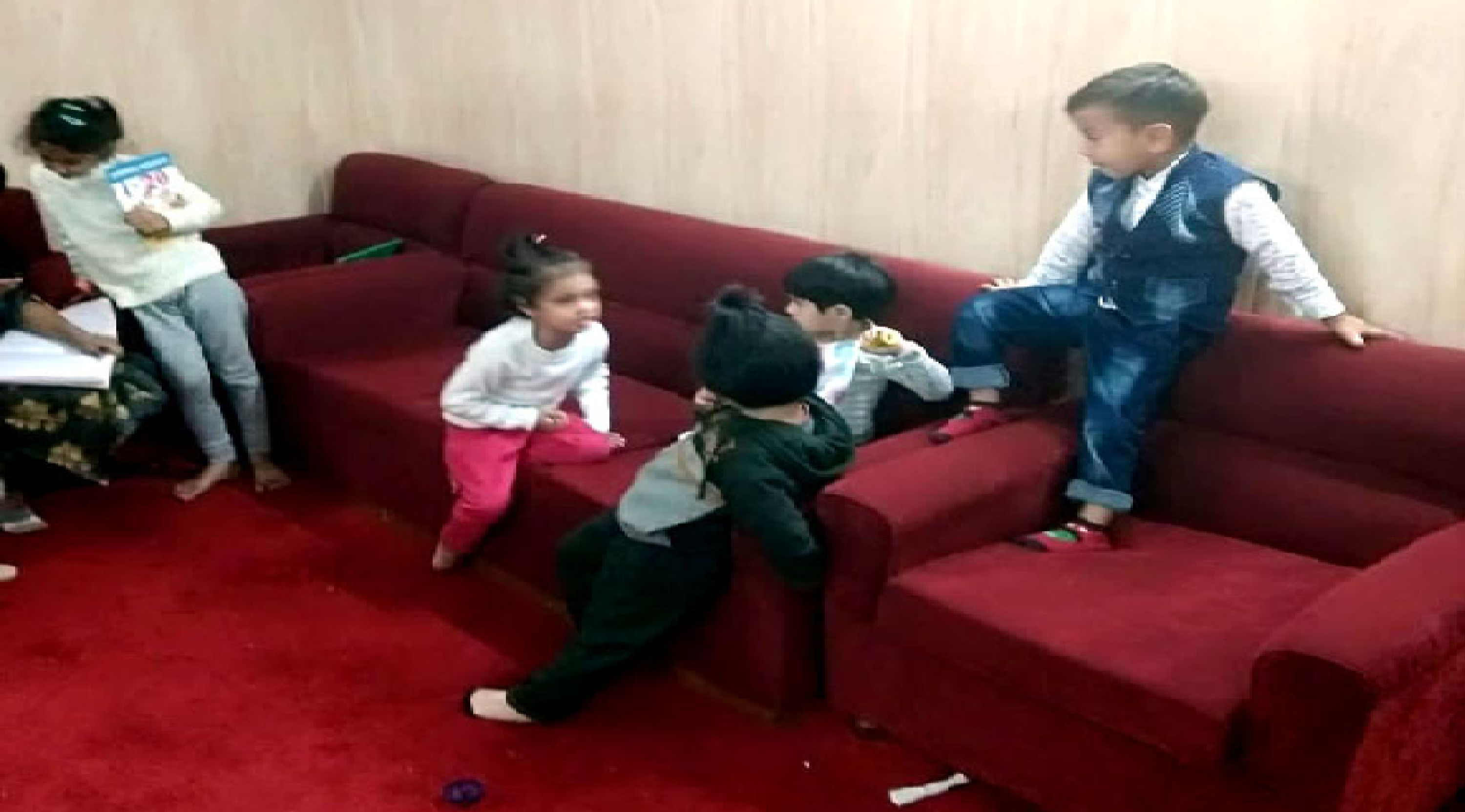 Kids having fun at a Crèche in Civil Secretariat in Jammu. (Daily Excelsior)

The authorities start a Crèche for kids of Secretariat employees within the premises of Civil Secretariat.

Twenty nine year old Junior Assistant at Law Department in the Civil Secretariat, Suriya was contented as she can now visit her little son, Abdul Wasi, two plus, anytime during her office hours as the authorities have started a Crèche for kids of Secretariat employees within the premises of Civil Secretariat in Jammu.

“Sir my husband is a Super Stockiest in Srinagar and he can’t move with me during the annual Darbar move while I rarely believe in child’s care by maids,” she said adding that the newly opened Crèche at Civil Secretariat is proving very beneficial to her and others like her.

“I am feeling good that my kid has started his schooling in Jammu with this Crèche,” Suriya said adding that whenever she gets time she pays a visit to her son and feeds him.

Hasiba, also two plus, was crying as it was her first day in the Crèche and her father Kamran, 34, Assistant Watch and Ward Officer at J&K Legislative Assembly, was taking her back.

Talking to Excelsior, Kamran said, he resides at Channi Rama area of Jammu and his wife is a Data Entry Operator at a Commerce College so she is unable to attend the baby for which the Crèche at Civil Secretariat has now become something never expected but direly needed.

“Even if a baby cries, we calls the parents who pay immediate visit and in this way the kids remain within the reach of their parents,” Deepika, a teacher at the Crèche said. The Crèche at the Civil Secretariat has been established in the building which earlier housed J&K Legislative Council (LC).

It is pertinent to mention here that after J&K State was reconstituted into two Union Territories, Jammu and Kashmir, and Ladakh, the LC was abolished.

Ahsan Danish Shah, Research Officer at State Resource Centre for Women, Social Welfare Department (SWD) said the Crèche started functioning from November 11 this year with daily two shifts-first from 9:30 am to 2:00 pm and the second from 2:00 pm to 5: 30 pm.

Sources informed that the Crèche is directly under the supervision of Rifat Arif-Special Secretary/State Mission Director at SWD’s State Research Centre for Women. Rifat Arif said that such a facility was direly needed for the Secretariat employees.

“Demands in this regard had started coming from the year 2003 and in the year 2018 we started a process for that,” she said.

“We took up the case with the Social Welfare Board for two Crèches with staff-one at Srinagar and another at Jammu,” the Special Secretary informed adding, after green signal from the Board, they approached Estates Department for accommodation which was given at the complex which earlier used to be the Legislative Council.

She further informed that the Crèche for Srinagar is yet to be sanctioned.

“In Lieutenant Governor, G.C Murmu’s introductory meeting with officers we took up the issue and got the approval and now we have the Crèche with registered 39 kids,” Arif further said adding that it is all free of cost as of now with 12-15 students regularly attending the Crèche as many others are in the Valley either awaiting vacations or completion of examinations.

The Special Secretary also informed that there are plans to further upgrade the Crèche to a Move Primary School.