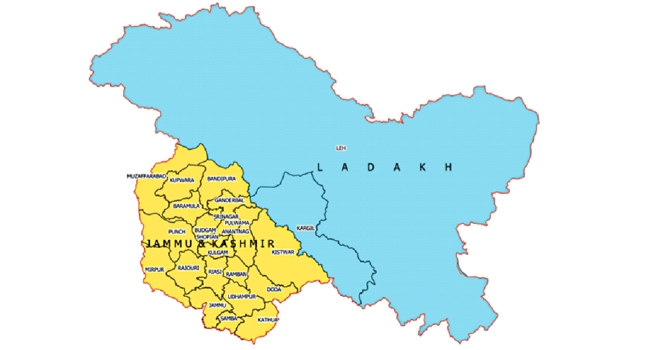 UT of J&K comprises of 22 Districts including Muzaffarabad and Mirpur areas of PoJK and the UT of Ladakh comprises of two Districts of Kargil and Leh, including the PoJK territories of Gilgit-Baltistan

October 31, 2019, will be recorded as a path-breaking day in the history of modern, independent India. The day marks the total integration of the state of Jammu & Kashmir with the Union of India, after the bold removal of the constitutional anomalies that were standing in the way of the Union of India. Not only was the divisive Article 370 of the Constitution nullified, the region was also bifurcated into two Union Territories to ensure better administration and accelerated development. The Union Territory of Jammu & Kashmir, however, is a temporary status that is likely to revert to full statehood when the situation stabilises.

Within two days of the momentous and historical change being implemented, the Union Government issued the modified map of India. The territories of PoJK were shown in their new dispensations with their respective Union Territories.

The whole of India including the reorganised territories are celebrating the successful and seamless implementation of this historic correction. It is considered to be the best post-Diwali gift given by any government to the nation. The National Democratic Alliance (NDA) Government at the Centre, under the dynamic leadership of Prime Minister Narendra Modi, is drawing accolades for the courage and maturity that it has exhibited in steering this big challenge to its rightful culmination.

Sadly, our neighbours are not ready to join us in the celebration, since they have never thought of becoming good neighbours. The publication of the modified map after the reorganisation of Jammu & Kashmir has sent these countries and their proxy allies again into a tizzy. In their panic they are making wild statements as usual. “[The political maps] displaying Jammu & Kashmir region and seeking to depict parts of Gilgit-Baltistan and Azad Jammu & Kashmir within the territorial jurisdiction of India, are incorrect, legally untenable, void and in complete violation of the relevant United Nations Security Council Resolutions,” a statement from Pakistan’s Foreign Office said.

Pakistan added that no decision taken by India can change the “disputed” status, adding that such measures by the Indian administration would not be able to “prejudice the right of self-determination of the Kashmiris.”

China has chosen to stay quiet but it has prevailed upon Malaysia to come to the aid of Pakistan. Mohd Azmi Abdul Hamid, the so-called President of the shady Malaysian Consultative Council of Islamic Organisations (MAPIM) said, “The implication of the new map is bound to create a strong public response amongst Kashmiris when the complete denial of their rights for self-determination for the Kashmiris is now confirmed.” He went on to add that India was clearly violating the United Nations Security Council (UNSC) resolution and called upon the UN to take strong action.

Such pathetic attempts to influence the situation are laughable. It is a known fact that all nations as well as the United Nations look upon the reorganisation of the states as an internal matter. So, who are such statements be directed at? It is simply saying something just for the sake of saying. And, who on earth is Mohd Azmi to pontificate to the UN? He must stay within his boots.

It is notable here that in March this year China destroyed nearly 30,000 maps of India produced within the country because they depicted the irrefutable reality of showing Arunachal Pradesh as part of India. Again in April, 2019 China, in the courses of its second Belt and Road Initiative (BRI) Summit, removed maps showing Jammu & Kashmir and Arunachal Pradesh as part of India from the BRI website. Obviously, in China, the left hand does not know what its right hand is doing.

Such belligerent, diplomatically obtuse, intemperate actions by the two nations have become a norm since the reorganisation of the state has been initiated by India. On October, 31, when the reorganised status of the Indian state came into effect, China openly declared the move as “null and void” in a dim-witted departure from all diplomatic norms that enjoin nations to desist from interfering in internal affairs of other countries. China had the gall to make this abrasive comment despite being in illegal occupation of vast tracts of Indian territories in Gilgit-Baltistan that have been illegally handed over to China by Pakistan.

Surprisingly, Pakistan also used more or less the same language in a statement that emanated from its foreign office. "These changes are ‘illegal and void’ as per the relevant UNSC Resolutions......,” the statement said.

None of what Pakistan and China are doing is going to affect the irreversible changes that have been brought about in the erstwhile state of Jammu & Kashmir. It is so because the changes have come by in accordance with the constitution of the Indian nation and they are for the betterment of the people living in the affected areas who have been suffering corruption, misrule and disruption for too long now. The bigger worry for Pakistan and China is the action that India may take to get back its occupied territories (PoJK).

This issue is giving to them sleepless night since they have large economic stakes in these colonised territories. Hence, these panic stricken statements. The infantile statements also indicate that the two countries are running out of options to deal with the situation, and in their frightened state, they are clutching at straws. It would be best for them to accept the reality and work towards coexistence as good neighbours. If this is done, the people of all sides will benefit tremendously.