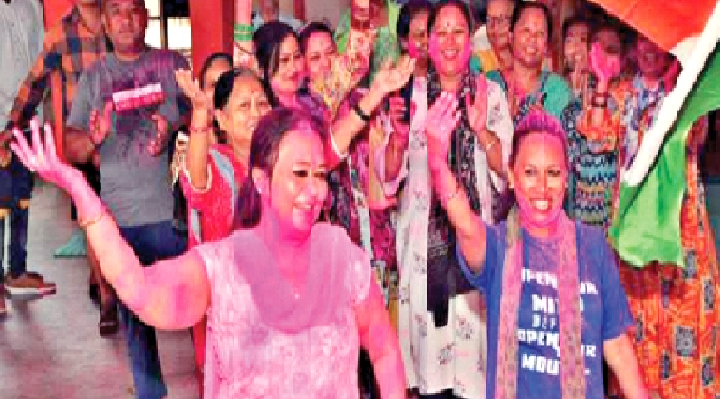 Gorkha community in Jammu celebrating amendment of Article 370 and Article 35A (Courtesy: organiser)

Discriminatory provisions like Article 370, and 35A were a monumental failure of a democracy that simply failed to safeguard the rights of the downtrodden and marginalised sections of a society under the guise of kashmiriat

Ever since the Union Government announced its historic decision to make Article 370 inoperative and consequently scrap Article 35A, the common refrain of naysayers is that the people of Jammu & Kashmir have been deprived of their ‘special status’.

‘Special’ has been the most abused word in the context of Jammu & Kashmir state. Violation of rights, exploitation of people and resources, and rampant corruption were justified and nurtured here for decades in the name of ‘special’.

Believing in the carefully constructed illusion of ‘enjoying’ some ‘special status’ and ‘special rights’, the people of Jammu & Kashmir have suffered for seven long decades at the hands of corrupt and anti-national forces. The reference to ‘anti-national’ here does not relate to the notion of patriotism but to those forces that blocked the 360° wellbeing of the state of Jammu & Kashmir, and hence impacted India as a nation.

Article 35A, drawing power from Article 370, gave the State Government the right to decide who could qualify as a ‘permanent resident’ of Jammu & Kashmir. Those who fit the state-defined criteria were given Permanent Resident Certificates (PRCs). And only those who had PRCs were entitled to certain ‘privileges’. What were these privileges? When you look closely, these so-called privileges were nothing but rights that people in other states enjoy anyway!

Yet these privileges came with a rider even for ‘permanent residents’. There were numerous ways by which the privileged PRC holders were also suffering. The J&K dispensation was always careful to control the narrative in such a way that people could neither pinpoint the source of their problems nor challenge the issues in court.

There was a small elite coterie, including the ruling dispensations, which enjoyed all the benefits of power and resources. They had mastered the art of waving the lollypop of ‘special rights’ to fool the people whenever the situation demanded, so as to maintain a status quo. Separatist and anti-national tendencies were allowed to roost because it suited their purpose.

Now that both the provisions – Article 370 and Article 35A – are dead and gone, all the residents of Jammu, Kashmir and Ladakh stand to gain in every way. But before we understand how that will come about, it is important to understand how different sections, comprising the society as a whole, have stood at a disadvantage till now.

The most significant drawback was that each and every resident of J&K was deprived of the benefits of central legislation. India being a welfare state, all new laws as well as amendments to the Constitution passed by Parliament are welfare acts. However, because laws could not be automatically extended to J&K, people were deprived of the benefits of many key central legislations such as anti-rape law, Prevention of Corruption Act, National Commission for Minorities Act and over a 100 other important legislations.

The disadvantaged sections i.e. Scheduled Castes (SCs), Scheduled Tribes (STs) and Other Backward Classes (OBCs) – though PRC holders – were deprived of reservation benefits that their brethren enjoyed in other states.

In 2002, J&K State Assembly stayed the delimitation of assembly seats till the year 2031. This deprived the backward areas of the state from proper representation in the assembly, but no one could even approach the courts for reprieve.

Half the population of J&K was directly impacted by Article 35A – since the PRC rules took away her right to choose her life partner. If a PRC-holding woman married a non-PRC holder, her family do not get any privileges. Which basically meant that either her family lived as second-class citizens or decided to move out of the State of J&K.

It was a stark case of legally sanctioned gender inequality. This law did not apply to men – their wives and children automatically acquired ‘resident’ status.

Since people from ‘outside’ could not get government jobs in J&K, the professional institutes of the State such as medical and engineering colleges have suffered majorly from lack of quality professionals. The State’s students have been the worst sufferers of this situation.

Lack of Progress and Opportunities

The so-called ‘special’ laws of J&K have been the biggest roadblock to the development of the State. Most areas of Jammu, Ladakh and even Kashmir are underdeveloped even from the perspective of the tourism industry, even though tourism is still the main industry that powers the state’s economy.

Multi-national companies have opened their offices across the country, but not in J&K. The restrictive laws have been a deterrent to business investment in the state. As a result the youth are deprived of adequate employment opportunities.

In an unjustifiable decision, the State Government had, between 2014 and 2016, denied permanent resident status to 4300 families whose forefathers had come in from Pakistan-occupied Jammu Kashmir (PoJK) in 1947. These families were official residents (state subjects) of J&K during Maharaja Hari Singh’s rule, and had moved to other areas to escape the atrocities of Pakistan, which had forcibly occupied parts of the state in 1947-48. These families were even denied the assistance provided to PoJK displaced persons under the Prime Minister Development Package.

Shockingly enough, the State’s laws allowed those who had moved to Pakistan during Partition to come back to J&K and reclaim their land and resident rights!

Residents, who lived in the State for decades but did not have a PRC were denied all the rights and privileges listed above. They could vote for Lok Sabha elections, but could neither vote nor participate in local level elections. This virtually reduced all non-PRC holders to being invisible when it came to getting benefits of governance – because they were not a ‘vote bank’.

Hundreds of thousands of such residents who have lived in the state over last 70 years – more than three generations– have suffered injustices. The communities that directly suffered the regressive laws under Article 35Awere:

Valmikis (safai karamcharis): In 1957, the J&K government specially invited around 200 Valmiki families from Punjab, to be employed as safai karmacharis (sweepers). These families agreed to work in the state after being promised permanent resident status. What they did not realise was that their status would be beset with the clause 'of being safai karmacharis' — a clause that would ruin the aspirations of generations!

More than 60 years later, the community has grown in numbers. Parents sent their children to school and hoped to build a better future for them. However, their dreams and efforts were shattered simply because they are 'permanent residents' only to the extent of being safai karmacharis!

Their children could not get admission to government-run institutes. The educated youths of Valmiki families were only eligible to apply for the post of sweepers. They were even denied promotions.

West Pakistan Refugees: Thousands of Indians who crossed over during 1947 Partition, from what is now West Pakistan, to the state of J&K were referred to as ‘West Pakistani Refugees’ till now! A baby born in 2019 was also called a ‘West Pakistan refugee’!

They were like other Hindus who chose to live in India, but happened to enter the state of Jammu and Kashmir. More than seven decades later, they are still identified as ‘refugees’ and forced to live in ‘camps’. Even the third generation is tagged as ‘refugees’ and denied rights and privileges that should have been automatically theirs.

Compare their situation with those who moved from Pakistan to other parts of India such as Delhi, Mumbai, Surat etc. They were rehabilitated with a number of welfare measures such as allotment of houses, jobs etc. and seamlessly integrated into the mainstream.

After 70 years of living like bonded labour, these families now hope to be free of the ‘refugee’ tag and live a life of honour.

Gorkhas: Gorkhas have lived and served the nation as security forces’ personnel for more than 100 years. Gorkhas settled in Jammu-Kashmir in the 18th century. Their population numbers around one lakh and is spread across J&K, including Kashmir Valley.

There are innumerable instances of Gorkhas who have made supreme sacrifices for the integrity of India and the safety of J&K. However, they faced big hurdles in getting PRCs, without which educated young Gorkha boys and girls could not get government jobs and admission to educational institutes.

Soldiers of the armed forces have sacrificed their lives in large numbers while securing the state’s borders with Pakistan and China, and in anti-terror operations.

Twenty-one soldiers who made the supreme sacrifice while fighting the enemy at the borders have been awarded India’s highest military award, the Param Veer Chakra (PVC). Fourteen of them were from other states.

It is extremely unfortunate that those who risked their life and limb, and made supreme sacrifices while safeguarding the lives of J&K residents and protecting every inch of its land, could never be given even a small piece of the land as a token of appreciation. Such were the laws of the state!

Officers of the Central Civil Services, who were posted in Jammu and Kashmir and served the state for 30-32 years, were never allowed to settle in the state after retirement. Even their children were not allowed admission in state-run professional institutes, nor could they apply for any state jobs.

In effect, the so-called ‘special’ laws of Jammu & Kashmir only resulted in creating and aggravating the feeling of alienation – both among J&K residents and non-J&K residents.

Earlier, people with vested interests promoted the false sense of being ‘privileged’. Now these very people, facing oblivion, are hell-bent on creating panic/discontent by harping on the same concept and making people feel as if they have been deprived of something very ‘special’.

An educated analysis of the effects of Articles 370 and 35A will convince the people of J&K that it is actually good riddance! This is the time to look ahead with positivity and to work hard towards building a bright future.