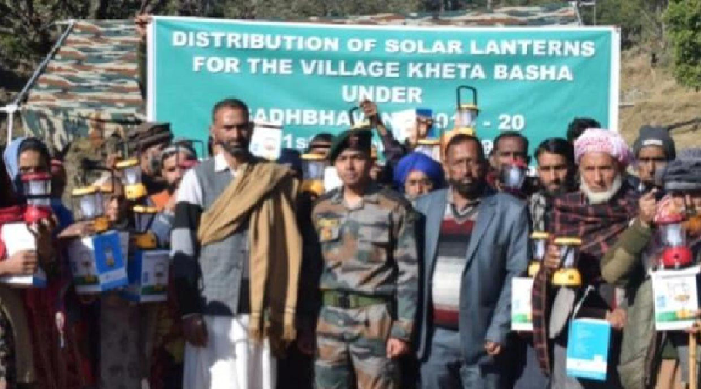 Rechargeable lanterns were distributed in Kheta Basha village, which has about 100 houses with only a handful having electricity connections

As part of ''Operation Goodwill'', the Army on Sunday distributed solar rechargeable lanterns in a remote village of Rajouri district in Jammu and Kashmir, a defence spokesman said.

The lanterns were distributed in Kheta Basha village, which has about 100 houses with only a handful having electricity connections, Udhampur-based Army PRO Lt Col Abhinav Navneet said.

In the absence of proper lighting, the PRO pointed out that residents of the village comprising Gujjars and Bakarwals are facing hindrance in their routine domestic work.

"To overcome the problem of electricity in the village and also help the Gujjar and Bakarwal families and their children, the Army provided solar lanterns to the families who do not have electricity connection," Lt Col Navneet said.

Additionally, he said the initiative would facilitate children studying in the dark, benefit the elderly and provide safety to women during night time.

"This effort of the Army will eventually help in reducing the dependence of villagers on kerosene lanterns, which otherwise are used for lighting in the absence of power supply. Thereby, it promotes the use of renewable, efficient and clean source of energy for a cleaner environment," the PRO said.

Lt Col Navneet said woolen sweaters were also distributed to children in the village adding that the local sarpach conveyed his gratitude to the Army for distributing the solar lanterns and sweaters to the village inhabitants.

The sarpanch said that the Army has always been supporting the village by conducting various welfare and development projects, especially for Gujjar and Bakarwal communities.