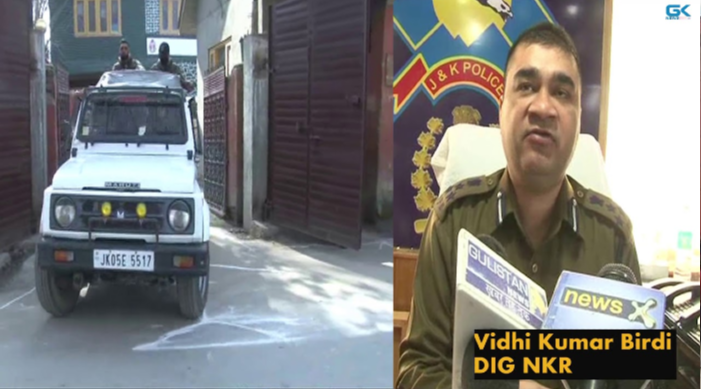 Ahead of the Republic Day, J&K police have busted a Jaish-e-Mohammad (JeM) module and arrested five of its “active” members involved in recent incidents of terror in the city, a senior police officer said on Thursday. Following searches based on the disclosures made by the arrested terrorists, police have recovered a huge cache of incriminating materials, including gelatine sticks, explosives, detonators, arms, explosive body vests, batteries and nitric acid, deputy inspector general (DIG), central Kashmir range, Vidhi Kumar Birdhi said at a press conference here. The five men, who were working towards executing sensational terror attacks and IED explosions, were nabbed in two phases, he said. Giving details of the arrests, Birdhi said a grenade explosion on January 8 near Habak crossing in Soura area of the city led to minor injuries to a few civilians. Police launched investigations into the crime and nabbed two suspects — Ajaz Ahmad Sheikh, a driver by profession, and Umar Hameed Sheikh, a street vendor — both residents of Hazratbal area.

During interrogation, they admitted to their role in the crime and provided leads to a similar attack near Kashmir University in Hazratbal area on November 26 last year, the officer added.“More raids were conducted and three more people — Imtiyaz Ahmad Chikla alias Imran, a sports shop owner, Sahil Farooq Gojri, a private company worker, and Naseer Mir, a businessman — were apprehended. All are residents of Hazratbal,” the DIG said.

Initial probe revealed that they had lobbed grenades at the two places as markets there were keeping open and carrying out normal business activities despite terrorists’ call to keep shut to protest scrapping of special status of J&K, the officer said.“Investigations have revealed their motives to enforce shutdown and paralyse normal life in Srinagar, and execute sensational incidents like terror attacks and IED explosions in coming days,” Birdhi added.