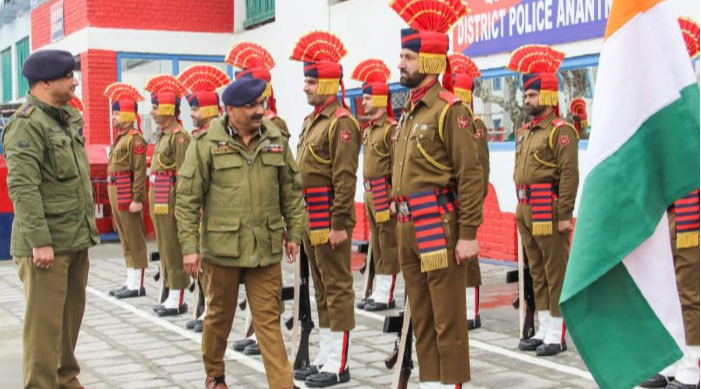 Jammu and Kashmir DGP Dilbag Singh accompanied by IGP Kashmir Vijay Kumar visited DPL Anantnag where he reviewed the security scenario of the district and also interacted with jawans and officers of Anantnag at District Police Lines.
Last evening the DGP visited parts of Srinagar city and interacted with officers and personnel at Police Station Nageen, Hazratbal. While addressing the police personnel the DGP stressed upon all ranks of police to improve their proficiency and gain more and more public confidence. Reiterating that safety of human lives and public property has remained among top priorities of the force, he said that Jammu and Kashmir Police despite facing tough challenges have succeeded in creating an environment of security among the public. "With the active cooperation of the people, police along with security forces have succeeded in bringing peace and it is our endeavour to keep the peace maintained at all levels," he added.

The DGP also expressed his gratitude to Union Railway Minister Piyush Goyal who during his public meeting at Akhnoor lauded the role of Jammu and Kashmir Police in maintaining peace and order in the Union Territory. "Police personnel must deal strictly with the elements who are hell-bent on pushing the youth towards terrorism and also are involved in radicalising the youth. Police officers should carry out the fight against drugs in a mission mode and book the persons involved in peddling activities," said Singh.