Security beefed up ahead of R-DAY in Srinagar 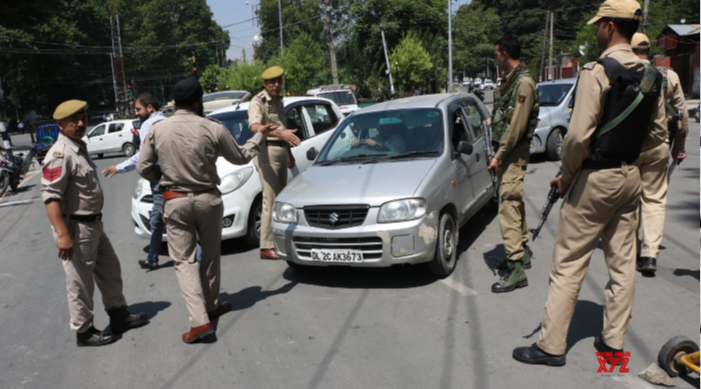 Security has been beefed up across Srinagar with police and paramilitary troops established checking points at various places in the city ahead of Republic Day function to be held at Sher-i-Kashmir International Cricket Stadium (SKICS) in Sonwar on January 26.

Officials said that security has been tightened across Kashmir including Srinagar to avoid any uncertainty ahead of Republic Day. Police have established checkpoints (nakas) at various places in the city while few routes leading to the venue are temporarily blocked in morning and evening hours.

Police was busy checking private and passenger vehicles at many places while people on board were thoroughly frisked besides checking their ID cards.

The road leading to SKICS from TRC Crossing to Gupkar Road is being temporarily blocked for traffic movement in morning and evening hours. The move according to officials is taken as a precautionary measure to avoid any uncertainty in and around the venue.

Officials said that all necessary arrangements on Republic Day function have been completed and that the authorities take precautionary measures to ensure the day passes peacefully.

Director General of Police (DGP), Dilbagh Singh during a press conference a few days ago said there is no major threat of attack by militants in Srinagar, however he was quick to add that nothing can be ruled out given arms and explosive recovered from militants arrested by the police in Hazratbal area recently.

Deployment of police and paramilitary forces has also been increased on roads in Srinagar to ensure no untoward incidents take place which lead to the loss of life. Deployment has been intensified around SKICS and its adjoining areas.