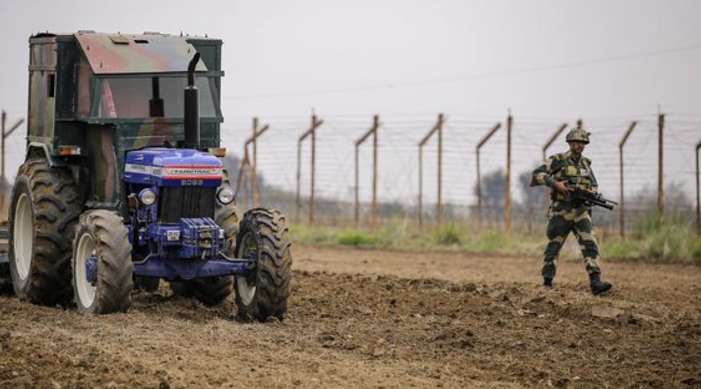 Officials said that anti-drone systems will soon be put in place along the IB in Jammu-Samba-Kathua belt to foil any attempt by Pakistan to effect a drone intrusion in future.

BSF troops guarding the 200-km-long International Border (IB) in Jammu and Kashmir will soon be armed with anti-drone system, officials said on Tuesday, a day after a Pakistani drone was downed in Arnia sector.

"We are working on it," a senior officer told PTI.
On Monday night, alert BSF troops shot down a Pakistani cameraless drone along the IB in Arnia sector of Jammu district, officials had said just after the interception.

Another set of officials said on Tuesday that anti-drone systems will soon be put in place along the IB in Jammu-Samba-Kathua belt to foil any attempt by Pakistan to effect a drone intrusion in future.

"The process of induction is on," one of the officials said, adding that initially five to six systems will be deployed in the area of operation on the Jammu frontier.

The force is also training troops to handle these systems, the official said.
In October last year, the BSF had issued an Expression of Interest (EoI) for acquiring the 'Anti Drone System'. The EoI was issued after several instances of UAVs dropping arms in Punjab from across the border were reported.

As per the specifications, the force has sought a ground-based anti-drone system in stand-alone platform. The instrument will run on rechargeable batteries, the BSF has stated as the system has to be deployed in tough-to-access border areas that includes dense forests, desert, rivers and others.

The system, the BSF specification said, should be capable to detect a lone suspicious flying object or group of UAVs (swarm attack) from a distance and should be capable of detecting a target within 10 seconds.

It (system) should be capable to do a real-time scan, detection, track and neutralisation of flying objects like multi-copters, fixed wing UAVs and radio-controlled UAVs in 360-degree environment, the October draft specifications said.

The force also desires that the prospective technology should have the "capability" to track multiple UAVs in a specified range and it should be able to neutralise the flying objects by jamming its radio and GPS (global positioning system) links simultaneously and also trigger signals to force land the drone.