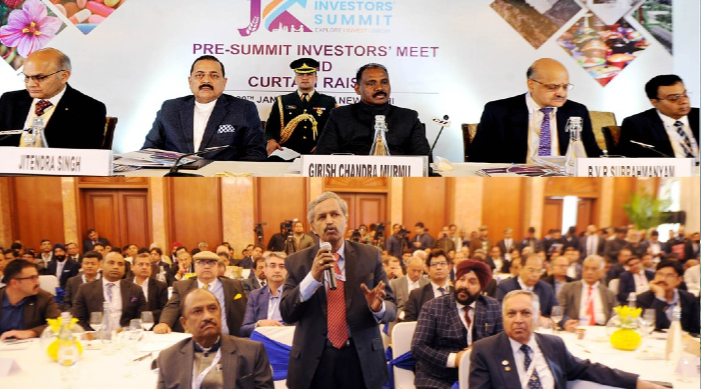 The Lieutenant Governor, Girish Chandra Murmu-led administration has begun massive preparations to organise the ‘J&K Global Investors Summit-2020’ in April to attract investors to the Union Territories of J&K and Ladakh.

The summit, which was earlier scheduled in October last year, could not take place. “Now the preparations are in full swing. In addition to other preparations, we will organize road shows from next month in major cities of the country to invite investors to invest in the union territory of Jammu and Kashmir,” A local news gathering agency KNS quoted a top government official as saying.

He said that the government is hopeful that the road shows and investors Summit in April will provide an opportunity to allay fears and apprehensions from the minds of outside business community about investment in J&K.

The government has already constituted the Apex Committee for hosting the event.

Sources said that the Apex Committee is responsible for the overall high-level coordination necessary for the successful conduct of the Investment Summit.

Jammu and Kashmir Trade Promotion Organization (JKTPO) is the nodal agency for conducting the summit.

Another top government official described the summit as a mega event for the Union Territory government. “Road-shows on the Summit are also being planned in next month. The Mega event will see strategic sectoral sessions, round table deliberations, technical presentations, partnerships, one-to-one business meetings and signing of memorandum of understanding,” he said.

He said that it will present immense opportunities to develop contacts between the local and outside business community and will provide not only primary employment but also generate secondary and ancillary employment opportunities for youth.
“Participating trade and industry organizations will have an opportunity to know first-hand about the business-friendly policies of the government and identify business opportunities in Jammu and Kashmir,” he maintained.

Official said the Confederation of Indian Industry has been selected as the national partner, while Earnest Young, PricewaterhouseCoopers and Expro have been selected as knowledge, media and event partner.

Quoting sources KNS reported that thousands of kanals of land have been identified so far and it will be open for outside investors soon.

Sources said that most of the companies which have shown interest to setup their businesses in Kashmir are from Maharashtra. There are companies in food processing, agri-business and manufacturing from Pune, Mumbai and other parts of the country.

Sources said that around 16,000 kanals of state land has been earmarked in regions of Jammu and Kashmir.
It is to mention here that the government had issued directions to all district commissioners, both in Jammu and Kashmir, to submit details about the state land available in their jurisdictions.

Lieutenant Governor Girish Chandra Murmu has already said that the first-ever Jammu and Kashmir global investors summit will be held in the region in April.

Speaking at a pre-investors’ global summit in Delhi, Murmu had said that sectoral seminars will be organised and the main events will be held in Srinagar.

While underscoring the importance of the event for J&K, the Chief Secretary has also said it will provide the newly-formed Union Territory a platform to showcase its strengths, strategies and potential in the investment sector.

The Chief Secretary has also said the Summit will kick start industrial development in J&K at par with other states and propel the UT as the preferred investment destination among the domestic and global investors.