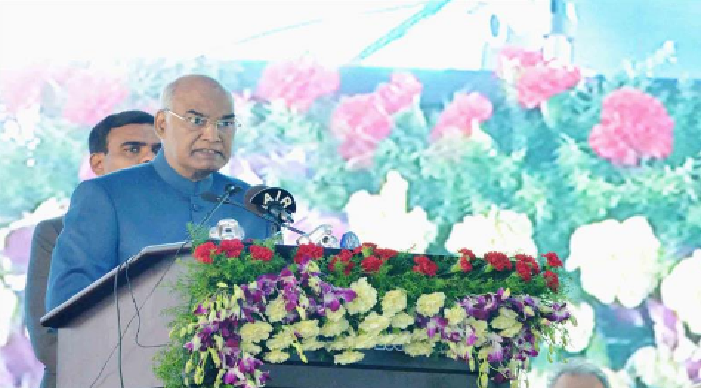 President Ram Nath Kovind said that since becoming a Union Territory all the developmental projects in Jammu and Kashmir, and Ladakh have gained momentum

He said Mookerjee, who was the great son of Bengal and the Minister for Industry and Supply in the Government headed by Jawaharlal Nehru, had said in the Lok Sabha, “In a democratic federal State, the fundamental rights of the citizens of one constituent unit cannot vary vis-à-vis the citizens of another unit. Are not the people of Jammu and Kashmir entitled to the fundamental rights that we have given to the people of India minus Jammu and Kashmir?”

Today, after seven decades, the whole country is happy that the dream of crores of freedom fighters, including Mookerjee, has come true and the people of Jammu and Kashmir, and Ladakh, Dalits and women from that area have also got the same rights as the people in the rest of the country, the President said.

“Rapid development of Jammu and Kashmir, and Ladakh, preservation of their culture and traditions, transparent and honest administration and democratic empowerment are among the priorities of my Government,” Kovind said.

He said during the President’s rule and since becoming a Union Territory all the developmental projects in Jammu and Kashmir, and Ladakh have gained momentum.

“The people there are now getting full benefits under the Swachh Bharat Abhiyan, Ujjwala Yojana, Ayushman Yojana, Ujala Yojana, Direct Benefit Transfer (DBT) and food subsidy in a transparent manner. Under the Pradhan Mantri Awas Yojana, while around 3,500 houses were built in Jammu and Kashmir till March 2018, in less than two years thereafter, construction of more than 24,000 houses has been completed,” the president said.

Apart from this, works relating to connectivity, irrigation, hospitals, schemes related to tourism and establishment of institutes of higher education such as Indian Institutes of Technology (IIT), Indian Institutes of Management (IIM), All India Institute of Medical Sciences (AIIMS) are also proceeding at a rapid pace in Jammu and Kashmir, and Ladakh, he said.

The NAFED (National Agricultural Cooperative Marketing Federation of India Ltd) has been entrusted with the responsibility for the direct procurement of apples in Jammu and Kashmir, the President said, adding that “this has especially benefited the apple growers of the Kashmir valley”.

Towards the end of 2018, elections in more than 4,400 panchayats of Jammu and Kashmir were conducted in a peaceful manner, Kovind said.
For the first time since Independence, elections to more than 300 Block Development Councils have also been held there, he added.

Kovind said the Government is working with “full force” to rid India of terrorism and security forces have been given a free hand in taking the “strongest” measures possible to deal with the menace.

The President touched on key foreign policy and military related issues and asserted that the world will witness an inclusive, prosperous, capable and powerful “New India” in this decade.

He said the appointment of the Chief of Defence Staff and creation of a Department of Military Affairs will improve coordination among the three services, besides speeding up their modernisation.

Referring to foreign policy issues, Kovind said India is stimulating economic growth and prosperity by increasing connectivity with its neighbouring countries and the “Neighbourhood First” policy has been a priority.

“My Government is of the view that foreign policy is a vital ingredient of the country’s economic and strategic security,” he said.

On India’s rising military prowess, Kovind talked about the successful test of anti-satellite weapons (ASAT) and major milestones in the development of the naval version of Tejas light combat aircraft.

“In these evolving times, to meet the new and complex challenges related to the defence of the country, my Government is working to make the defence forces stronger, more effective and modern,” he said.

On tackling terrorism, he said alertness on the part of the citizens is extremely helpful in dealing with the challenge in view of the changing nature of terrorism.
“My Government is working with full strength and determination to free the country from the scourge of terrorism,” he said.

“The decrease in terrorist activities in Jammu and Kashmir demonstrates that public cooperation can be effective in the fight against terrorism. My Government has given the security forces a free hand in taking the strongest measures against those indulging in terrorism,” the President said.


On India’s external engagement, he said the Government has also strengthened ties with other countries of the world apart from countries in the neighbourhood. “This is why a number of countries have bestowed their highest honour on India. Our cooperation with ASEAN (Association of Southeast Asian Nations) and African countries is being taken to a new level,” he added.