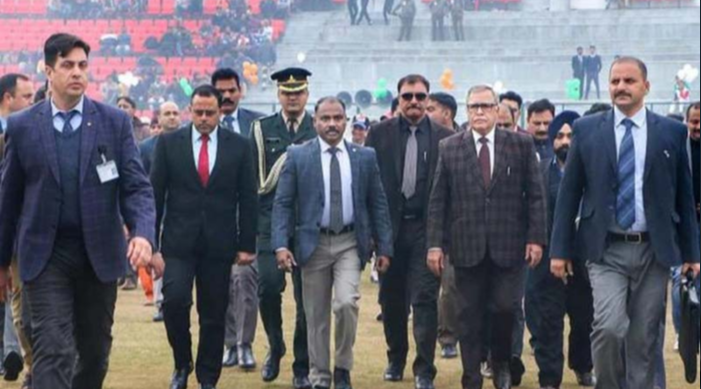 Inspector General of Police (Kashmir) Vijay Kumar made a detailed presentation about the security scenario of Kashmir Valley focussing on the measures initiated for ensuring peace and stability there.

Kumar briefed the Lieutenant Governor about various successful anti-terrorism operations carried out jointly by the police and security forces in which several top terrorist commanders have been killed recently.

He also briefed about various other security measures that have been taken in order to strengthen the security grid of the valley, including the strengthening of check points at the sensitive locations.

The IGP also briefed about the initiatives taken for enhancing the synergy and coordination among various forces operating at the ground level.

He presented an overview of the steps initiated by the security forces in the valley to counter the challenges faced at the ground level.

Murmu applauded the efforts of security forces, particularly the police, in maintaining peace and stability in Jammu and Kashmir despite challenges.

He appreciated that JK Police has rendered countless sacrifices for ensuring peace in the valley and exhorted the officers to ensure that criminal elements are kept under check.

He laid emphasis on strengthening coordination among the forces so as to ensure a crime-free society.