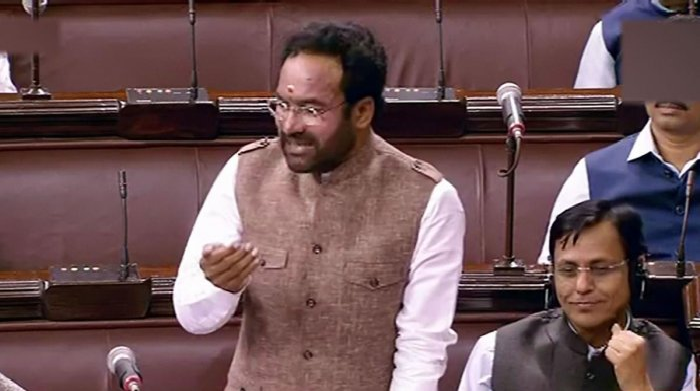 Union Minister of State for Home Affairs, G Kishan Reddy, said this in his written reply to a question regarding the impact of the abrogation of Article 370 on J&K in the Lok Sabha

Union Minister of State for Home Affairs, G Kishan Reddy, in a written reply in Lok Sabha to a question regarding the economic impact of the abrogation of Article 370 on Jammu and Kashmir said that the full economic potential of Jammu, Kashmir and Ladakh regions could not be realized for the last 70 years as the people of Jammu and Kashmir have suffered from terrorist violence and separatism supported from across the border for the past many decades.

On account of article 35A and certain other constitutional ambiguities, the people of this region were denied full rights enshrined in the Constitution of India and other benefits of various Central Laws that were being enjoyed by other citizens of the country.

As reported by the Government of Jammu and Kashmir, the agriculture operations are going on smoothly in the valley. During FY 2019-20 (upto January, 2020), 18.34 lakh MTs of fresh fruit (apples) have been dispatched.

In the horticulture sector, under the Market Intervention Schemes (MIS) launched by the Government of India in September 2019, for the first time, 15769.38 MTs of apples valued at Rs. 70.45 crores have been procured up to 28th January 2020, directly from the growers in Kashmir valley through National Agriculture Marketing Federation of India (NAFED). This scheme has been extended up to 31st March, 2020. The sericulture sector recorded a production of 813 MTs of silk cocoon in the year 2019. During the 1st three quarters of FY 2019-20, handicrafts worth Rs. 688.26 crores were exported. Various tourism promotional campaigns have also been launched.

“Government of Jammu and Kashmir has informed that as per the Periodic Labour Force Survey, last conducted for FY 2017-18, by the Ministry of Statistics and Programme Implementation of Government of India, the worker-population ratio for persons in the age group of 15 years and above for Jammu and Kashmir is 51%,” the minister said.

“The Government of India is fully committed to the overall development of the Union Territory of Jammu & Kashmir and Union Territory of Ladakh. Under the Prime Minister’s Development Package-2015 of Rs. 80,068 crores, major development projects in Road, Power, Health, Tourism, Agriculture, Horticulture, Skill Development Sectors etc. are already under various stages of implementation. Many flagship schemes including the individual beneficiary centric schemes are being proactively implemented by the Government of India towards development of J&K region,” he added.