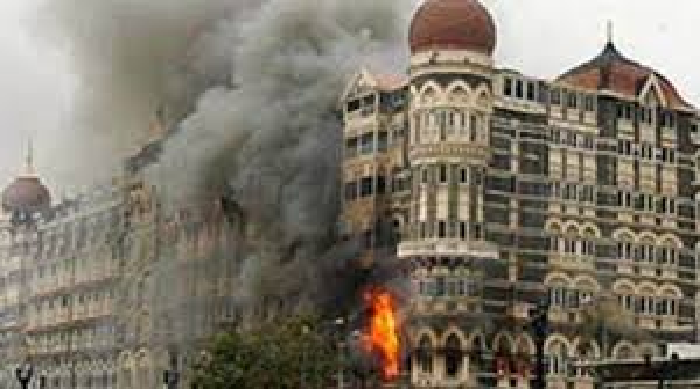 Though Jamat-ul-Dawa chief Hafiz Saeed was sentenced by an anti-terror court, Pakistani agencies are yet to act on India’s requests for action against him in the Mumbai terror attacks of 2008

Saeed, who is a United Nations (UN) designated terrorist, was arrested on charges of terror financing on July 17, 2019. The JuD founder has since been kept at Lahore’s Kot Lakhpat Jail under high security.

The terror financing cases against Saeed, however, have nothing to do with the 26/11 Mumbai terror attacks.

Pakistani courts and law enforcement authorities are yet to act on India’s repeated requests for action against him over his involvement in the Mumbai terror attacks of November 11, 2008. Ten terrorists from the Pakistan-based Lashkar-e-Taiba attacked multiple locations in the city, killing 166 people and wounding over 300.

India has provided definitive evidence against Saeed and others, explaining their role in the Mumbai attacks, on several occasions. One such dossier was given to Pakistan by India on August 21, 2009. It was based on the confessions of Mohammed Ajmal Kasab, the only terrorist who was caught alive after the attacks. India shared this dossier with the envoys of several countries, including the United States.

IndiavsDisinformation has accessed, through Wikileaks, a cable sent by the US Embassy in New Delhi on August 24, 2009 giving details of the information contained in the dossier. The cable was sent to the White House and different wings of the US government, including the Central Intelligence Agency (CIA).

Given below is the full text of the dossier on the 9/11 attacks, as detailed in the US Embassy cable.

1. Hafiz Muhammad Saeed is the founder-leader of Lashkar-e-Taiba (LeT) which was formed in 1990 as the militant wing of Jamaat-ud-Dawa. He is reported to have been born on 5 June 1950 at Sargodha, Punjab, Pakistan. His Pakistani national identification No. is 35200255098427.(1)

2. After the Lashkar-e-Taiba was banned by Pakistan in January 2002, he shifted the terrorist activities of LeT to the parent organization, the Jamaat-ud-Dawa.

4. The Mumbai attacks can be broken down into 12 separate incidents. Consequently, 12 FIRs were registered. In each of these 12 FIRs Hafiz Saeed is shown as a wanted accused. Eventually, on 25th February 2009, a single charge sheet was filed in Sessions Case No. 175 of 2009 and on 6th May 2009 the Trial Court framed charges in that case. Apart from the three accused who have been apprehended, there are 9 deceased accused and 35 wanted accused. Hafiz Saeed is named at SI. No.1 of the 35 wanted accused. The substance of the charge is that ""being members of Lashkar-e-Taiba (internationally banned terrorist organization) during the period between December 2007 and November 2008 were party to a criminal conspiracy to wage war against the Government of India and to commit the offences punishable under..."" The enumerated offences are under The Indian Penal Code, 1860, Unlawful Activities (Prevention) Act, 1967, The Arms Act, 1959, The Explosives Act, 1884, The Explosive Substances Act, 1908, Prevention of Damage to Public Properties Act, 1984, The Railways Act, 1989, The Customs Act, 1962, The Foreigners Act, 1946 and the Passport (Entry Into India) Act, 1920.

5. There is ample evidence to support the charges against Hafiz Saeed. Since he is a wanted accused, on 15th July 2009 the Trial Court issued a Non-Bailable Warrant (NBW) and has directed the Police to arrest him with the help of Interpol and produce him before the Trial Court.

6. Mohammad Ajmal Mohammad Amir Kasab, the apprehended terrorist, is accused No. 1. On 21st February, 2009, he made a confession before the Additional Chief Metropolitan Magistrate. In this confession, he narrated the entire story beginning with his recruitment and ending with his arrest in Mumbai. Portions of his confession statement which refer to Hafiz Saeed are summarized below.

7. Kasab went to Lahore looking for work. The Jamaat-ud-Dawa (JuD) was holding camps at different places. Kasab and his friend used to visit these camps and they decided to take training for preparing for jihad. In December 2007, Kasab and his friend Muzaffar Lal Khan reached the office of LeT in Raja Bazaar, Rawalpindi. They were recruited. They went through a 21-day period of training between December 2007 and January 2008. It is during this training that he first met Hafiz Saeed, Zaki-ur-Rehman Lakhvi, Muzammil @ Yusuf, Abu Umar Said, Abu Hamza, etc.

8. Hafiz Saeed spoke to the trainees on many occasions. Once he said, ""all the mujahiddins have to fight for freeing Kashmir"". When they were at the training camp located in the Chehalabandi mountain of Muzaffarabad, Hafiz Saeed visited the camp. There was another person whom Hafiz Saeed embraced. Kasab was told that he is ""Major General Saab"" and that the trainers were ""his men only"". When Kasab and others reached Sevai Nallah, Hafiz Saeed was present. It was Hafiz Saeed who selected the trainees and gave them new names. He named Kasab as Abu Mujahid. Kasab underwent marine training and subsequently was taken to Baitul Mujahiddin, a training camp.
Hafiz Saeed was present and inquired about the marine training. Three days later, Hafiz Saeed and others sent six mujahiddin to Kashmir to carry out an attack. On the l3 day of Roza, the selected mujahiddin were called to the office of the Baitul Mujahiddin camp and Hafiz Saeed told them ""the time for jihad has come. Now we have to decide how to attack Hindustan."" Major General Saab came to the place and wanted to see their preparedness. Hafiz Saeed told Kafa to set up 10 targets. The mujahiddin were asked to shoot at the targets. Kasab fired at target number 4. Major General Saab complimented Kasab and said ""you have completely destroyed the target and I am very much pleased.""

9. After the training, Hafiz Saeed and another person made 5 ""buddies"" from among the 10 mujahiddin. Kasab was paired with Ismail Khan.

11. At the camp, Hafiz Saeed and others took the 10 mujahiddin to a big hall. It was described as the control room of the media wing. The roads in Mumbai and the targets were shown on a big screen.

12. On 22 November 2008, the terrorists left Karachi to carry out the attacks in Mumbai.

13. Fahim Ansari is the second accused in the case. He had been apprehended on 9th February 2008 as an accused in the CRPF, Rampur Camp attack case (1st January, 2008). When he was interrogated in the Mumbai attack case, he made a statement on 18th December 2008 in which he stated that, at the end of training in Pakistan, Hafiz Saeed and others visited the training camp. Hafiz Saeed and others also addressed the trainees and asserted the importance of jihad.

14. Sabahuddin is the third accused in the case. He had been apprehended on 10th February 2008 as another accused in the CRPF, Rampur Camp attack case (1st January, 2008). When he was interrogated in the Mumbai attack case, he also made a statement on 20th December 2008 in which he stated that during his training in Pakistan he was taken to Muridke which is 50 kms. away from Lahore on the Lahore-Islamabad highway. That is where Hafiz Saeed and others were based. Sabahuddin was in a safe house for about 3 1/2 months till mid-March 2003. When Hafiz Saeed was released from house arrest, he offered a special prayer at Mochi Darwaza in Lahore. Sabahuddin saw Hafiz Saeed for the first time at the prayer and he claimed that he was ""enlightened by his preaching during the prayer.""

15. In the Final Report submitted by the Police before the Trial Court, Hafiz Saeed has been listed among the ""planners and trainers behind the attack"". The Final Report also refers to ""communication between terrorists and co-conspirators in Pakistan."" Three mobile telephones were used by the terrorists. There were incoming calls from one number and outgoing calls were made to three numbers. According to the Final Report, these calls were made or received for seeking/giving instructions from/to the co-conspirators in Pakistan. Investigations have further revealed that these numbers were connected to an account created with CALLPHONEX, a VOIP service provider based in New Jersey, US. Kharak Singh, a wanted accused, while communicating with CALLPHONEX, used an e-mail id which was accessed from at least ten IP addresses. Five of these addresses are in Pakistan. Among them is the address of Col. R Saadat Ullah, who belongs to the Special Communication Organization, Qasim Road, Rawalpindi, Pakistan.

16. Of the above, a copy of the confession made by Kasab before the Additional Chief Metropolitan Magistrate has been given to the Government of Pakistan (Dossier Nos. 3 and 4 dated 19th May and June 2009 respectively.) Likewise, copies of the statements made by Fahim Ansari and Sabahuddin have also been given to the Government of Pakistan (Dossier No.5 dated 1st August 2009.) The charges framed against the accused are a public document. Particulars relating to the CALLPHONEX and the calls made and received by the terrorists have also been shared with the Government of Pakistan in Dossier No.3 (Booklet No.14) dated 19th May 2009. The non-bailable warrant issued by the Court is a public document.

17. Among the offences for which the accused, including the wanted accused, have been charged is the offense of belonging to LeT. Since LeT is a terrorist organization listed in the Schedule to the Unlawful Activities (Prevention) Act, 1967, they have been charged with offences under the Unlawful Activities (Prevention) Act, 1967.

18. From the above, it would be abundantly clear that there is cogent and credible evidence pointing to the involvement of Hafiz Saeed in the planning and execution of the terrorist attacks in Mumbai. It is obvious that this evidence would have to be developed through:
— Further investigations in Pakistan, especially in the places mentioned by Kasab, Fahim Ansari and Sabahuddin in their statements;
— Interrogation of Hafiz Saeed;
— Interrogation of other persons mentioned in the statements of Kasab, Fahim Ansari and Sabahuddin;
— Interrogation of Pakistani nationals arrested by FIA,
Pakistan; and
— Analysis of mobile telephone call data of Pakistani nationals arrested by FIA, Pakistan.

20. In the alternative, Pakistan should assist India in executing the Non-Bailable Warrant against Hafiz Saeed. If the Indian authorities are able to arrest Hafiz Saeed and produce him before the Trial Court, the investigating agency in India would be able to interrogate him and gather more evidence.

21. Pakistan cannot continue to remain in a state of denial on the involvement of Hafiz Saeed in planning and executing the terrorist attacks in Mumbai. Any independent observer, who has read the material before the Trial Court in Sessions Case No. 175 of 2009, would come to the conclusion that there is cogent and convincing evidence pointing to the role of Hafiz Saeed warranting further investigation. The evidence on record together with the evidence that may be gathered in the course of further investigation would * and should - certainly lead to the prosecution of Hafiz Saeed.

(Source: The Hindu, quoting a US Embassy cable sent from New Delhi on August 24, 2009 giving details of the information contained in the dossier)