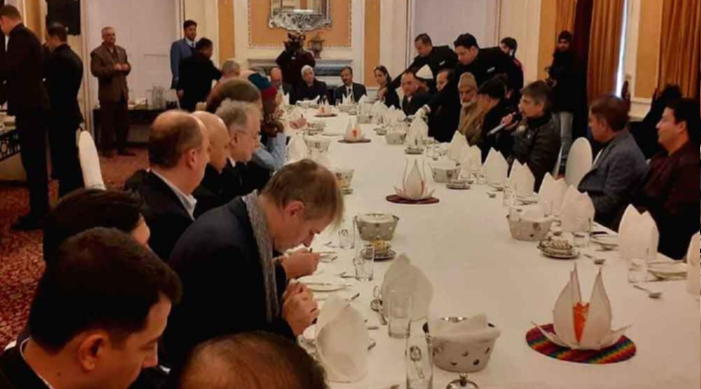 PDP leader Khalid Jahangir and Congress state general secretary Usman Majeed were among a group of politicians who met the delegation of foreign envoys in Srinagar on Wednesday.

After the meeting, Jahangir told IANS that he raised the issue of political detentions in Kashmir. He said he told the delegation members that the majority of the people in Kashmir hate the mainstream leaders.

He said he told them that the three former Chief Ministers who have been detained must be released.

"The former Chief Ministers must be released if there are no charges against them and they are not involved in any unlawful activity," he said.

"A peaceful political process is needed in Kashmir."

He said he raised the issue of the day to day problems faced by the people in Kashmir and said that it is the responsibility of the Central government to mitigate the sufferings of the people.

Majeed told IANS that he was not representing his party but met the foreign envoys in his individual capacity.

He said he told the delegation members that there is a disconnect between the administration and the people and elections in J&K should be held as soon as possible.

"I told them the government of India should compensate for the loss of Article 35A and that the fight for restoration of statehood will continue."

Twenty five foreign envoys began their two-day Jammu and Kashmir visit on Wednesday with a Shikara (boat) ride on Dal Lake in Srinagar.

The envoys will travel to Jammu on Thursday after interacting with representatives of civil society groups in Kashmir.