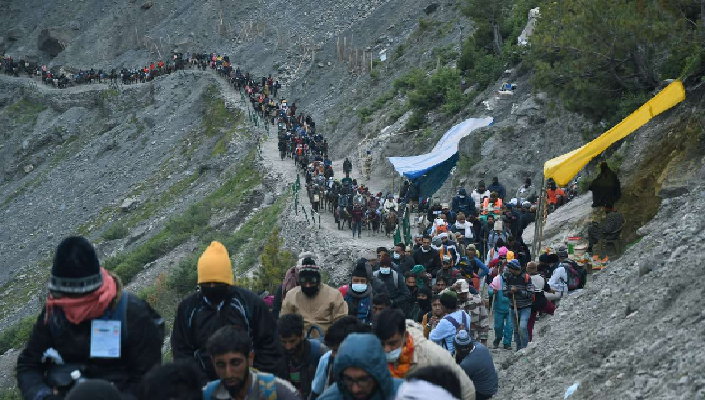 A 42-days Yatra would commence on 23rd June, 2020, an auspicious day of Jagan Nath Rath Yatra as per Hindu Calendar, and conclude on Shravan Purnima (Raksha Bandhan) on 3rd August, 2020

Regarding the duration and date of commencement of the Yatra 2020, based on the approach set out by the Sri Sri Ravi Shankar Committee, which had been set up to advise regarding the duration and schedule of future Yatras, the Board, keeping in view the foremost concern of the safety and security of the pilgrims, decided that a 42-days Yatra would commence on 23rd June, 2020, an auspicious day of Jagan Nath Rath Yatra as per Hindu Calendar, and conclude on Shravan Purnima (Raksha Bandhan) on 3rd August, 2020.

The Board further directed for wide publicity through the electronic and print media, informing the intending Yatris to timely secure the prescribed Compulsory Health Certificates issued by the Doctors/ Hospitals nominated by their home States or UTs and only thereafter proceed to seek Advance Registration from the nearest located designated Bank which would issue the pilgrim a Yatra Permit valid for the specified date and route. The Board also advised CEO to appeal to all the potential pilgrims to consult their doctors before embarking on the pilgrimage. The CEO shall also widely publicize that no person below the age of 13 years and above the age of 75 years shall be permitted to undertake the pilgrimage.

The Board directed the CEO to take timely steps for ensuring uninterrupted telecom connectivity in the Yatra area. Appreciating the important services rendered by the Langar Organizations, the Board looked forward to their continued support during the ensuing Yatra.

The Board directed the CEO to caution all potential pilgrims to particularly take into account the difficult climate and terrain in the high altitude region of the Yatra and prepare themselves fully before embarking on the pilgrimage. The Board also requested the intending pilgrims to make themselves physically fit for the arduous Yatra by taking regular walk and exercise. As in the past, the awareness campaign would be launched with the cooperation and support of the Ministry of Information and Broadcasting and all information relating to Yatra will be placed on the Board’s Website (www.Shriamarnathjishrine.com).

Noting the Chairman’s direction for sustained efforts being made to further improve the facilities to be provided to the pilgrims this year, the Board reviewed the Action Plan drawn up for the conduct of Yatra 2020, particularly the arrangements being made for providing medical care, sanitation facilities, installation of the railings at all vulnerable points along each of the two routes, measures being taken to preserve the environment of the Yatra area by ensuring removal of garbage in a scientific and environment friendly manner.

Instructions were also issued to ensure that the Yatra routes and camps remain plastic free and completely prohibited the entry of single use plastic.