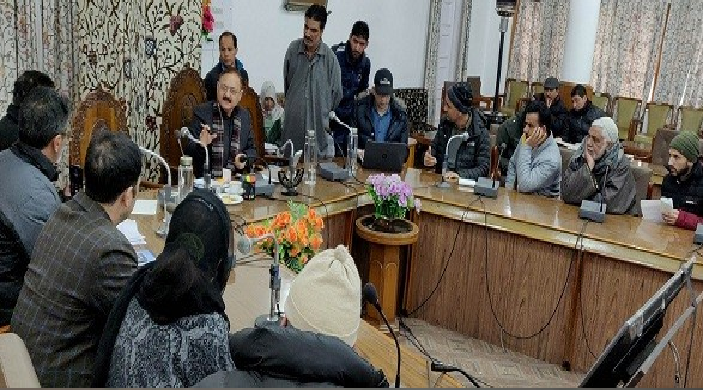 'Officers in their positions of power must understand helping people gives the best satisfaction of their service,' Principal Revenue Secretary said

During the programme, a large number of deputations and individuals from across Kashmir including, Srinagar, Budgam, Anantnag, Baramulla, Ganderbal, Kulgam, Pulwama, Langate, Shopian, Gurez, Bandipora, Kangan, Kupwara, Uri and other areas met the Principal Secretary and highlighted their issues.

Speaking to officials during the camp, Kotwal asked them to reach out to the people and address their issues on priority.

“People want better services and public servants must understand that if they provide right time relief to the people, it is going to bring remarkable changes on the ground,” he said.

“Officers in their positions of power must understand helping people gives the best satisfaction of their service. That is the service that we are meant to provide to the people of this land,” he added.
Meanwhile, the Principal Secretary listened to scores of delegations and individuals patiently; assuring their grievances would be addressed as soon as possible.

Some of the delegations were provided on-spot relief after Principal Secretary, along with the officials listened to their grievances.

The Administrative Secretary was flanked by senior officials of the Revenue Department and Power Development Department.

Matters related to the Power Development Department were also heard by Principal Secretary, Dr Pawan Kotwal, along with SEs of PDD.

A delegation from Magam, Handwara, demanded permission for extraction of stones in Kachcharai land. They said that the forest authorities have stopped their entry—which was affecting their livelihood.
A delegation from Malbagh, Hazratbal demanded road widening of their area—saying that the issue was long-pending.

A delegation of south Kashmir’s district Pulwama demanded to shift of HT Line from Gulzarpora, Awantipora as it was creating inconvenience to the masses.

A delegation of Sholipora area of central Kashmir’s district Budgam demanded posting of Naib Tehsildar in their area. They said that people were suffering in the absence of the office and the officials.

A delegation led by BDC Chairman, Langate demanded Patwar Khana. They also demanded road widening from Younisu to Kohru under PMGSY. The delegation put forward several other demands besides urging the officials to work on the demarcation of Sopore-Kupwara road.

A delegation from Bhagat Kanipora said that their areas has been left out of the developmental activities, demanding Government must take measures to address their developmental concerns.

A delegation from Karnah, Tangdar said that they were assured job to their educated youth after the later provided 5 kanal of land to the Jammu and Kashmir Power Development Corporation (JKPDC) in 2017. However, they said, nothing till date was done by the authorities. They demanded their grievances may kindly be looked into.

During the camp several service matter cases were also taken up. These deputations sought an early redressal from the Government.

The Administrative Secretary assured the deputations and individuals that all their issues would be looked into for timely redress.