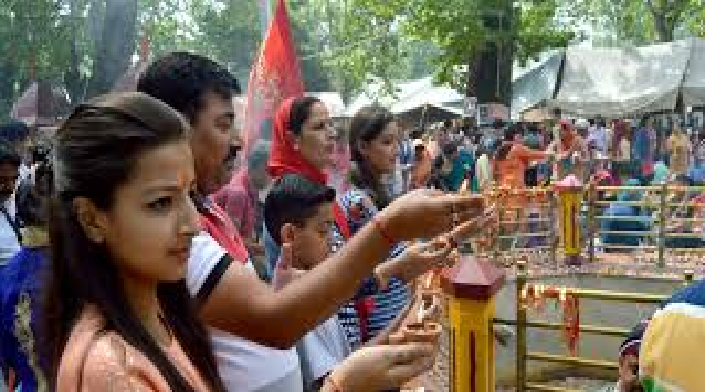 A large number of devotees visited different temples, particularly Shankaracharya on the hill top of Takhat-e-Suliman, since early morning

The most important festival of the Kashmiri pandits -- ‘Herath’ (Maha Shivratri) -- was celebrated on Friday throughout the valley by members of the pandit community, who participated in night-long prayers.

A large number of devotees were visiting temples, particularly Shankaracharya on the hill top of Takhat-e-Suliman, since early this morning.

After joining night-long puja in their respective houses despite chilly weather conditions, people greeted each other on the occasion of “Salaam”, a Persian word for greeting. Muslims and members of other communities greeted their Kashmiri pandit brethren on the occasion.

Meanwhile, the authorities have set up special fish sale counters at different places in the valley for the Kashmiri pandits, who didn’t migrated along with other community members in 90s or returned here.

The Shivratri festival extends to about three weeks in Kashmiri Pandits' households and each day or a group of days, has a special name and religious function which include social performances also.

The Mahashivratri festival, observed as “Hairath” by Kashmiri Pandits on the marriage anniversary of Lord Shiva and Goddess Uma, begins on the first day of Phalgun Krishna Paksha and ends on the Amavasi day in Phalgun. In between, there are numerous auspicious days like Hur Ashtami.

Walnuts, whose shape represents the universe, play an important part in 'Hairath' rituals. Walnuts are filled in earthen pots and then filled with water. The water is changed every day of the festivals. A big earthen pot, two medium sized earthern pot, two small earthen pot, clay modelled to the shape of elephant trunk and seven bowls are used in the Hairath ritual and they are known as 'watuk'.

The 'watuk' represents Shiva, Parvati, Ganesha, Sapta Rishis and other deities. Fasting is observed on the important puja day and it comes to an end at night. The rituals come to an end on the Amavasi day, which follows Shivratri. The puja items, flowers and pots are immersed in rivers. Walntus are distributed as ''prasad''.

There are various interesting legends related to the festival of Mahashivaratri. According to one of the most popular legends, Shivaratri marks the wedding day of Lord Shiva and Parvati.

Some believe that it was on the auspicious night of Shivaratri that Lord Shiva performed the 'Tandava', the dance of the primal creation, preservation and destruction. Another popular legend states that Lord Shiva manifested himself in the form of a Linga. Hence, the day is considered to be extremely auspicious by Shiva devotees and they celebrate it as Mahashivaratri - the grand night of Shiva.

People believe that there is snow or rain on 'Hairath' day. It is said that during Pathan rule, Kashmiri pandits were asked to celebrate the 'Hairath' festival in June and there was snowfall.

The day after Mahashivaratri night-long Puja, is called salaam, a Persian word for greeting. It is a day of fun and feasting, a sort of Thanksgiving Day when relatives, friends and colleagues would exchange greetings. The poor would visit Hindu homes and take their share of Shivaratri gifts in cash or kind or both as the case may be.

Shivaratri puja is also called 'watuk puja'. 'Watuk' is a Kashmiri word meaning 'collection or an assemblage of different objects'. Since the main puja on Shivaratri day involves collection of a large number of articles, it was given the name 'watuk'.

They also worship watuk Bhairav, supposed to be Shiva's most trusted dwarpal (gate-keeper). In Kashmiri Pandit Community, it is customary for the women-folk, the old and young alike, to visit their parental home and return to their in-laws with some money as token of love which in Kashmiri language is called "atagat" and fire-pot (kangri), considered to be a good omen on this occasion.