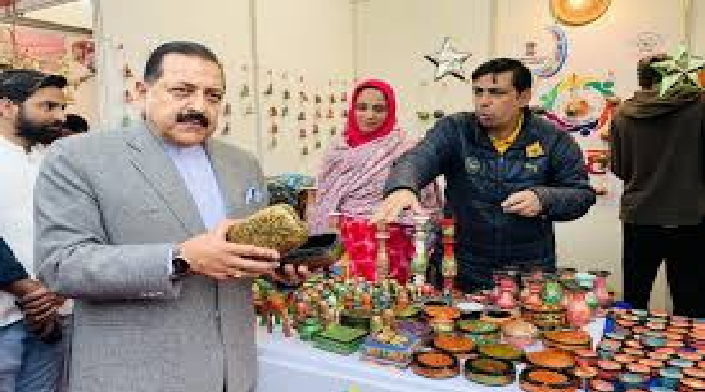 While going through the stalls put up for display of carpets and Shawls from J&K, Dr. Jitendra Singh also suggested to promote the sale and provide incentives

Union Minister of State (Independent Charge) Development of North Eastern Region (DoNER), MoS PMO, Personnel, Public Grievances, Pensions, Atomic Energy and Space, Dr. Jitendra Singh svisited "Hunar Haat" , the week-long festival organised by Ministry of Minority Affairs at Rajpath here. During his visit, he made it a point to stop and spend time at the stalls and counters put up by artisans from Jammu & Kashmir and Northeast.


During over one and half hour visit by Dr. Jitendra Singh, he went to different counters and stalls but particularly visited each of the stalls put up by participants from Jammu & Kashmir and the different North Eastern States. During his interaction, he was seen keenly inquiring about the preferences of the clients and customers for different items and the extent of sale accomplished.
While going through the stalls put up for display of carpets and Shawls from Jammu & Kashmir, Dr. Jitendra Singh also made some suggestions to the organizers to promote the sale and provide incentives. Similarly, he also stopped over at the stalls put up by the North Eastern States like Manipur and Assam, and inquired about the preferred items sought by the visitors.
At the Bamboo stall, displaying bamboo items and articles,

Dr. Jitendra Singh was seen sharing information about the Cane and Bamboo Technology Center (CBTC ) near Guwahati and invited the artisans to visit the Centre, in order to pick up cues for value addition, innovation, and creation.

Dr. Jitendra Singh also evinced interest in handicraft stalls put by the "Gharana" artisans from Uttar Pradesh and inquired how best could it be possible to create fusion products through intermixing of Lakhnavi, Manipuri and Kashmiri artisanship.

Later speaking to media persons, Dr. Jitendra Singh said, offered a unique opportunity to experience the feel of every part of India, from c"Hunar Haat"uisine to garments. This, he said, also offers the opportunity to young entrepreneurs and aspirants to experiment and explore novel means of creativity coupled with a livelihood.