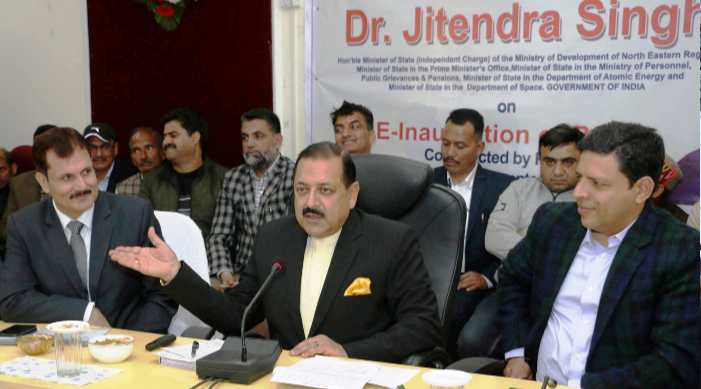 The main focus of the central government is to empower the Panchayati Raj Institutions (PRIs) in Jammu and Kashmir, Union Minister Jitendra Singh said on Sunday. He advised officials to cooperate and ensure that all funds and functions are transferred to PRIs as per government circulars.

The minister of state in the Prime Minister''s Office was addressing a meeting to review the progress of all centrally sponsored schemes (CSSes) being executed in Udhampur district, an official release said.

Singh asked the officers to make sure that all development plans and identification of beneficiaries for schemes are done in consultation with PRIs. He asked Block Development Council chairpersons to submit the list of left out areas that require road connectivity to the Pradhan Mantri Gram Sadak Yojana (PMGSY) department in consultation with PRIs.

The minister said under the government''s initiatives, a large number of industries are to be established in the Union Territory. Singh also asked the local youth to come forward and join hands with industrialists to become entrepreneurs.

He also chaired a meeting of the Kathua district development coordination and monitoring committee, the release stated.

The committee is responsible for effective coordination of almost all the programmes of the central government, whether it is for infrastructure development or social and human resource development, the minister said.

Its role is to facilitate timely execution of approved projects in the district, he added.

The minister directed all heads of departments to cancel all attachments in their respective departments so that employees can work and render their services in remote and far off places. He also stressed on rationalisation of staff, especially in the health, education and public health engineering departments, as people have high expectations from these departments.

The minister also e-inaugurated various roads constructed under PMGSY here. Singh was informed that these roads have been constructed in Kathua, Udhampur, Reasi, Doda, Ramban and Kishtwar districts of the Jammu division.

The total length of these roads is over 137 km and have been constructed at a cost of Rs 74.74 crore, according to the release.