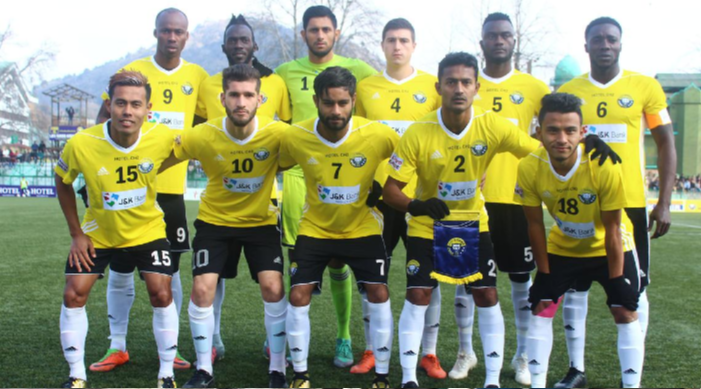 The win propelled Real Kashmir to the fifth spot in the standings with 18 points from 12 matches, only behind fourth-placed East Bengal on goal difference

Real Kashmir snapped their two-match losing run with a 1-0 victory over Indian Arrows in an I-League match here on Monday.

Ivorian Bazie Armand scored the game-clinching goal in the 70th minute at the TRC Ground.

The win propelled RKFC to the fifth spot in the standings with 18 points from 12 matches, only behind fourth-placed East Bengal on goal difference.

The turnout at the TRC ground was around 10,000 cheering for their home team despite being a Monday, the first day of the week.

Sandeep Chattoo, co-owner of Real Kashmir Football Club said- “The spring has set in Kashmir valley and the team worked for hard to overcome the bad phase at home away games. I am hopeful that we will achieve our targets at the end of the home game”.

David Roberston, Coach of Real Kahmir Football Club said- “The is first of the seven home games that we have won and the team is hopeful of having all the points in their kitty by the end of this run at the home turf”.

RKFC’s two losses, 2-1 against Churchill Brothers and 1-0 against Punjab FC, pushed them down to the eighth spot in the standings.

It was the bottom-placed Arrows’ ninth defeat of the tournament that kept them rooted at eight points from 13 matches. The Arrows were beaten 1-3 by East Bengal in their last game.

RKFC were on the offensive from the first whistle and tried to use their physical supremacy to break the deadlock.

In the 35th minute, Kallum Higginbotham came close to scoring but his shot from outside of the box was saved by Arrows goalkeeper Lalbiakhlua Jongte.

The foreigner-less Arrows were not penetrative enough inside the box and resorted to long range efforts in their efforts to score.

The goalless first half prompted RKFC to commit more men forward after the break. That paid dividends in the 70th minute when Armand reacted quickly to nod home from inside the six yard-box before an onrushing Jongte could collect the ball.

The strike was enough to break Arrows’ will. Though they tried their best to equalise, RKFC were well equipped to block out any dangerous move and collect three important points.

The Snow Leopards will next host Aizawl FC in Srinagar on Feb 29 while Arrows will play against defending champions Chennai City FC on Feb 28 in Mumbai.