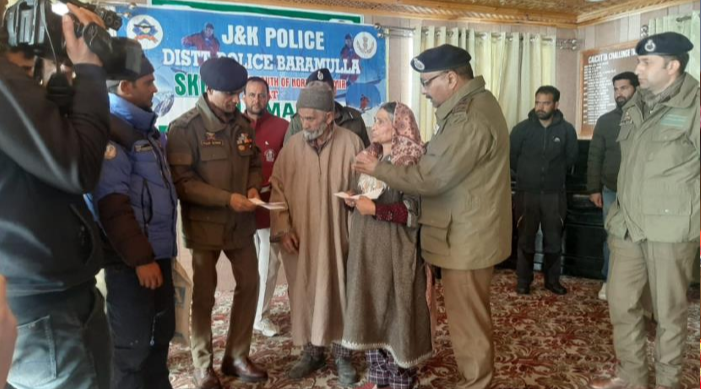 Financial help can''t heal the wounds of the martyrs'' families, but the department is committed to look after them, Director General of J&K Police Dilbag Singh said on Thursday at the end of the 10-day skiing course for the youth of North Kashmir organised by the J&K Police under its Civic Action Proagramme in Gulmarg.

Dilbag Singh, who was accompanied by IGP Kashmir Vijay Kumar, presented ex gratia relief cheques of about Rs 22 lakh to the parents of martyred Special Police Officer (SPO) Bilal Ahmad, who sacrificed his life during an encounter in Baramulla in August last year.

Referring to the martyrdom of Bilal Ahmad, the DGP said that SPOs were working shoulder to shoulder in every field and the department was making all possible efforts to increase and enhance their welfare measures.

The DGP also appreciated the role of the trainers of J&K Police for taking keen interest in tapping, channelising and polishing sports talent in the Valley.

"Another such course exclusively for girls will be organised in future," Dilbag Singh said.

"J&K Police personnel have scaled the highest peak on the earth, Mount Everest, twice, and are also serving as coaches in national teams," he said.

The DGP also said that J&K Police will hold many more programmes such as Jashn-e-Dal and Jashn-e-Wullar so that awareness regarding environmental degradation being witnessed by these water bodies, which are world famous for their beauty and characteristics, is created among the community members.