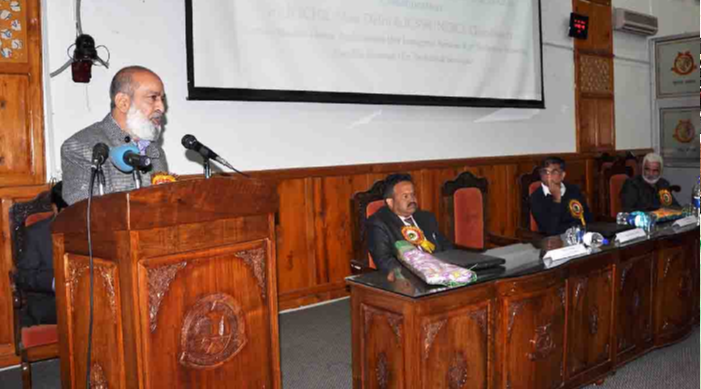 'There can't be a better venue other than Kashmir to discuss Allama Iqbal as his ancestors belonged to Kashmir and Allama always felt the pain and agony of Kashmiris,' said Prof Akbar Masood, Dean, Academic Affairs

A three-day international seminar on ‘Allama Iqbal’s contribution to the promotion of Urdu, Persian, Philosophy, Art and Scientific Thought’ organized by Iqbal Institute of Culture & Philosophy University of Kashmir (KU) started here at KU on March 4.

On the inaugural day of the seminar which was held at KU`s Gandhi bhawan auditorium scholarly discussions and deliberations were held on the various aspects of the theme by the scholars, researchers and intellectuals from the country and abroad.

In his presidential address Vice Chancellor University of Kashmir Prof Talat Ahmad said “Iqbal Institute of Culture & Philosophy of KU is one of the few such research centres across the South Asia which is keenly focused with its mandate of promoting and propagating the work, philosophy and vision of Allama Iqbal at various forums and so far the institute has achieved great appreciation from one and all for its endeavor.”

Professor Talat said that the genius of Allama Iqbal could be understood from the fact that he presented his philosophy and world vision not just in one but in various languages and “after delving deep in both the western and the eastern /Islamic traditions of knowledge, Iqbal evolved his philosophy of human world and the world of nature.”

Dean Academic Affairs, KU, Prof Akbar Masood who was special guest on the occasion said in his remarks “There can`t be a better venue other than Kashmir to discuss Allama Iqbal as his ancestors belonged to Kashmir and Allama always felt the pain and agony of Kashmiris to which he has referred to in his various works. He was not only a poet but a great visionary.”
In his remarks Registrar KU Dr Nisar A Mir while maintaining that the vision and philosophy of Allama Iqbal has assumed more and more relevance than ever before in contemporary times talked about the emphasis laid by Allama Iqbal on the growth and progress of an individual and how he connected it with the progress of nations and societies.

Speaking on the occasion Dean School of Applied Sciences & Technology KU Prof Farooq Masoodi who was guest of honour on the occasion said “If we understand and realize our duty and respect which we owe to our fellow human beings as envisioned by Allama Iqbal then many problems confronted by the humans and nations in the modern day would come to an end and there won`t be any conflicts.”

In his keynote address former Director Iqbal Institute of Culture & philosophy KU Prof Bashir A Nehvi said “Allama Iqbal devoted his whole works in prose, poetry, letters and notes to the pursuit of explaining the unique philosophy of life. Indeed he looked into the issues of humanity from a multiple angels and methods prevalent in the modern times which include religious, historical, legal and artistic specially.”

He said that Iqbal wrote a number of poetical works in both Urdu and Persian which are of immense literary value and have impressed stupendously their readers not only in the Indian subcontinent but across the world.

Former Chairperson Centre of Indian languages JNU Delhi Prof Mohammad Shahid Hussain was also present on the occasion as guest of honour. The seminar was attended by several faculty members, students and scholars from KU and other universities.

Earlier Coordinator Iqbal Institute of Culture & Philosophy Dr Mushtaq Ahmad presented the welcome address and deliberated upon the aims and objectives of the seminar. (GNS)