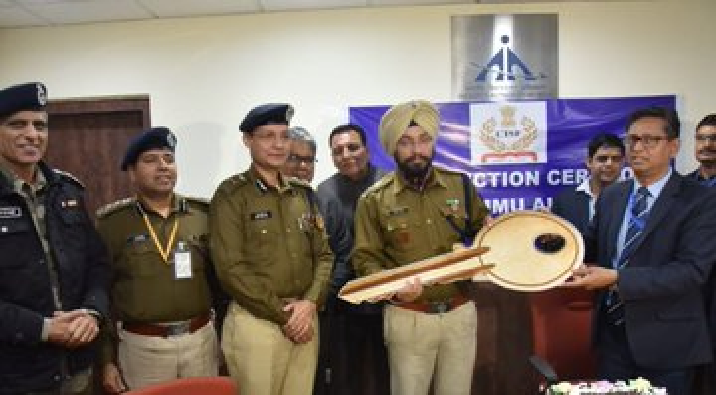 The Central Industrial Security Force (CISF) took over the security of the Jammu airport on Friday with the deployment of around 300 personnel, officials said.

On February 26, the central force had similarly been inducted to guard the Srinagar airport in Jammu-Kashmir.

While the induction of the force at the two airports in Jammu-Kashmir and Leh in Ladakh was decided long back, the process was expedited after J-K Police DySP Davinder Singh was arrested on January 11 ferrying three Hizbul Mujahideen militants to Chandigarh.

The security of the Leh airport will also be taken over by the CISF soon.

DySP Singh’s alleged links with militants had raised concerns over the security of these sensitive civil aviation facilities that fall in the Union Territories (UTs) of J-K and Ladakh, which border Pakistan and China respectively.

Jammu airport director P R Beuria handed over a ceremonial key to CISF Commandant Gurjit Singh to mark the event.
The Airport Authority of India-operated airport was till now being guarded by the JK Police and the CRPF.

Around 300 troops, in shifts, will provide a 24×7 armed cover to the facility and will frisk passengers at the gate, followed by comprehensive checks ahead of boarding a flight.

The troops are armed with assault rifles like the AK series and the INSAS, and will man the airport perimeter from watch towers erected at vantage positions, the officials said.

The CISF will provide a “comprehensive anti-terror cover to the facility” and a commandant-rank officer will head the unit at the Jammu airport, a senior official said.

With this induction, the force now has 63 airports under its cover in the country.