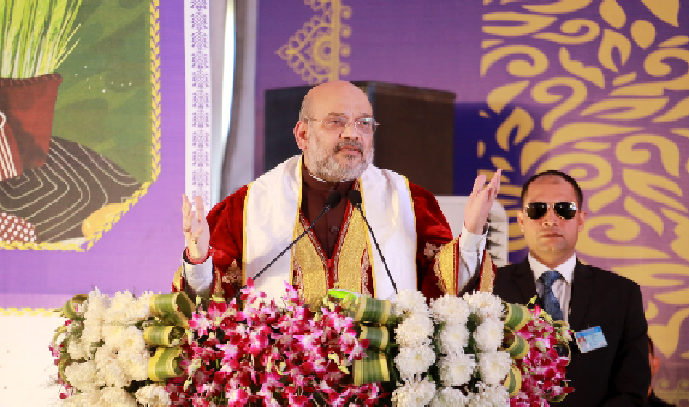 Speaking on the recent law and order situation in some parts of Delhi while replying to a discussion under Rule 193 in Lok Sabha, Shri Shah expressed grief over the violence and paid homage to those who lost their lives in the riots. He further expressed his support to the victims and their families and assured them that the perpetrators would be caught and punished irrespective of their religion or political affiliation. He took the occasion to assure the nation and the people of Delhi that the Narendra Modi government will not spare any individual involved in the riots, and that no innocent will be harassed.

Noting the quick and efficient response of Delhi Police, Shri Shah said that it was to the credit of the force that not a single incident of rioting took place after 11:00 PM on the 25th of February and the riots were contained within 36 hours, with the first incident being reported at 2:00 PM on 24th February. He remarked that Delhi Police had done a commendable job to limit the riots to 4% area and 13% population of Delhi, and while not undermining the violence that took place, wrapping up the riots in 36 hours shows the efficacy of the action taken by Delhi Police.

Commenting on the quick spread of the riots, Shri Shah remarked that the riots spread fast because of the high population density of the affected areas, which has a mixed population. He said, the narrow lanes prevented effective timely intervention by police vehicles and rescue by ambulances. He said that on the 23rd and 24th of February, 30 to 40 companies of Delhi Police and CAPFs were deployed in affected areas and further added that more than 80 paramilitary companies are deployed even today in the affected areas, with specialized strike forces created to quickly control the riots if such a situation arises again.

Shri Shah gave an account of the action taken by Delhi Police after the riots and said that more than 700 FIRs have been registered so far and a total of 2647 people have been detained or arrested. He said that more than 25 computers are analyzing CCTV footage to identify perpetrators and that Delhi Police has appealed to the public for any footage they may have, and many common people have come forward with the footage they shot on their phones. He noted that on the basis of the scientific analysis, more than 1100 people have been identified, and 40 teams have been formed to arrest those rioters who have been identified. He added that several people crossed over from Uttar Pradesh specifically to incite riots, which shows that this was a well-planned conspiracy. He said that one of the first actions on part of the police was the sealing of the UP-Delhi border at 10 PM on 24th of February.

Shri Shah said that two SITs have been formed under senior police officers to investigate the riots and a case of conspiracy has been registered. He said that the investigation has recovered 152 arms used in the riots and about 49 cases under arms act were registered. He noted that agencies are investigating Hawala transactions that took place after January and three people who financed the riots have been arrested by Delhi Police, and two people affiliated with ISIS have also been nabbed for stoking communal violence. In order to ensure the prevalence of peace, more than 650 Peace Committee meetings have taken place till date, with representation from all communities being ensured.

Shri Shah said that the Ministry had communicated to the Delhi High Court regarding the establishment of a Claims Commission for relief and rehabilitation of victims and informed the House that recoveries would be made from those responsible for the destruction of properties. He also noted that more than 60 social media accounts had been created specifically to incite communal violence between 22 and 26th February, and that 25 cases had been registered under the IT Act for the same.

Shri Shah urged the House not to refer to the victims on the basis of their religion and emphasized that every victim was an Indians. He added that 52 people had been killed and 526 injured in the riots, while 371 shops and 142 houses had been destroyed. Refuting the allegation that the police was siding with rioters, Shri Shah said that on some occasions, the police had to resort to throwing stones in order to deter the rioters while maintaining restraint. He said that more than 5000 tear gas shells and 400 bullets had been fired by the police to control the riots.

Referring to the background of the riots, Shri Shah said that after a rally at Ramlila Ground on 14th December by the Opposition, Dharna at Shaheen Bagh started on 16th December. He said, a WhatsApp group United Against Hate was created on 17th February and inflammatory speech was given by some leaders on 19th February, all these led to protests by 8-9 groups in the area and culminated into riots. Shri Shah also added that that vested interests have incited and misled minorities and indulged in fear mongering that the CAA would take away their citizenship, which is not true. He emphasized that not a single clause in CAA takes away anyone’s citizenship.

Again lauding the role of Delhi Police, Shri Shah said that the force acted with great restraint and yet with great efficiency to control the riot in 36 hours, and ensured its primary objective of not letting the riots spread in the several mixed localities of Delhi.