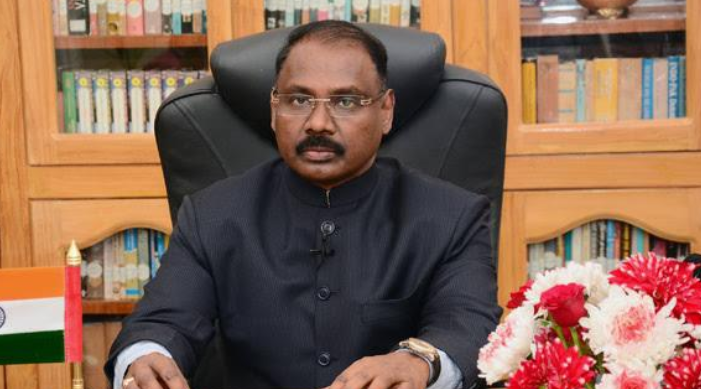 Appealing to Gujarati businessmen to invest in Jammu and Kashmir, Lieutenant Governor Girish Chandra Murmu yesterday dispelled impression of traders about militancy, land restrictions and other issues in the newly created Union Territory saying the militancy has become negligible and was confined to certain pockets.

Addressing businessmen at a roadshow in Ahmedabad in Gujarat yesterday, the last in the series of shows organized by the Jammu and Kashmir administration in big cities to attract investment, Murmu said the kind of apprehensions about the region that existed earlier are no longer there.

“Apprehensions like militancy and other things are limited to certain pockets. That too has become negligible. What was happening in earlier years is gone. There is complete peaceful atmosphere there,” he said.

Murmu said while there were no restrictions now on outsiders purchasing land in Jammu and Kashmir, the Union Territory Government is investing in urban infrastructure and connectivity, and has earmarked a huge land bank to set up industries.

Prior to Ahmedabad in Gujarat, the home State of Prime Minister Narendra Modi and Union Home Minister Amit Shah, where Murmu had also served as Additional Principal Secretary to Modi during his tenure as the Chief Minister of Gujarat, the Jammu and Kashmir had organized five roadshows at Bengaluru, Kolkata, Mumbai, Hyderabad, and Chennai and signed non-binding Memorandums of Understanding (MoUs) promising investments of over Rs 10,000 crore.

Murmu had also attended the roadshow at Mumbai while other roadshows were joined by top bureaucrats of the Union Territory. The roadshows were prelude to the first-ever Global Investors Summit being organized by Jammu and Kashmir on May 26 and 27 which is expected to be attended by Prime Minister Narendra Modi, Home Minister Amit Shah, Finance Minister Nirmala Sitharaman, Commerce and Railways Minister Piyush Goyal and Union Minister of State in the Prime Minister’s Office (PMO) Dr Jitendra Singh.

The Lieutenant Governor said the Jammu and Kashmir administration will ensure that jobs, lands and assets are protected for the people of J&K.

“Let me tell you, a lot of apprehension is there, and local people also have apprehension that if we open up Jammu and Kashmir, there will be a host of people coming from outside, and what about us? At this forum, I would like to say that although we have opened up everything, we will see to it that job, land and assets are protected for the (local) people, as it happens in Gujarat,” Murmu said.

He added that Jammu and Kashmir youths are proactive and competent, and there was no lack of skilled manpower, and industry setting up units there will create ample opportunities for them.

He said the Jammu and Kashmir Government is working to remove barriers and facilitate a single-window system in order to attract investment, and claimed that the Union Territory was witnessing a “paradigm shift” after the abrogation of Article 370 and 35 (A).

“We have implemented three-tier Panchayati Raj system. We are empowering Urban Local Bodies. We are implementing other things, and also decentralizing. Everything will be in place. We will be facilitating single window system and are also replicating Indextb kind of thing. So you will see more ease of doing business,” he said.
Indextb is an investment promotion organization of Gujarat government to facilitate industrial development.

Murmu said while the region has ample hydro power supply, skilled manpower, and connectivity, his Government has come out “with a very competitive policy,” drafting sectoral policy to facilitate investment.

“We are restructuring departments, streamlining each and every thing to provide ease of doing business. We are facilitating everything,” the Lieutenant Governor said.

The J-K administration sought investments, especially in the areas of textiles, food processing and manufacturing from Gujarat.

Murmu, according to an official handout, said the Gujarati businessmen are successful worldwide and they should also explore the vast investment opportunities in Jammu & Kashmir.

With 6 domestic roadshows, which ended in Ahmedabad city today, the delegations led by the Lt Governor, attended by over 150 delegates, 21 B2G meetings has signed 35 MoUs worth Rupees 2141 crore with big corporates, MNCs, Business Groups and Investors from different sectors.

Arun Kumar Mehta, Financial Commissioner Finance, Jammu & Kashmir shared that J&K 2.0 is open for industry including private sector. He further said that J&K is expected to grow by approximately 10 percent for next ten years. GST collection has increased by 40 per cent this year which is highest percentage in country.

In the next phase of outreach initiative for the Global Investors Summit, JKTPO shall be organising Mini Conclaves in Jammu and Srinagar to sensitize residents.

The event was organised by Jammu and Kashmir Trade Promotion Organization (JKTPO), a nodal agency for Government of J&K along with Confederation of Indian Industry (CII) as the National Partner, Ernst & Young as the knowledge partner Media Partner Price water house Coopers (PwC).